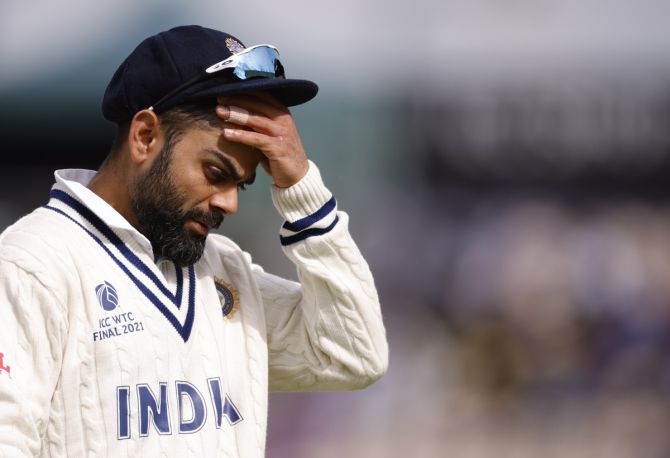 IMAGE: Virat Kohli took over the reins of India’s Test team in 2014. He led it in 68 Tests, winning 40 and losing 17. Photograph: John Sibley/Reuters

Former Pakistani pacer Shoaib Akhtar believes Indian cricket finds itself at the crossroads after the end of Virat Kohli's captaincy era, leaving a big task ahead for Rahul Dravid who will have to prove that he is not an 'overrated' coach.

Weeks after he was sacked as ODI captain, Kohli took everyone by surprise after he quit the captaincy from the longest format following a 1-2 series defeat against South Africa.

"I don't know what (BCCI president) Sourav Ganguly and other people think. But Indian cricket is definitely at the pinnacle point (crossroads)," Akhtar said on the sidelines of Legends League Cricket T20 tournament Muscat.

"Virat didn't leave captaincy but was forced to do so. This is not the best of times for him but he needs to prove what he is made of. Is he made of steel or iron? He is a great guy and a cricketer. Do not try too many things, just go out there and play cricket. He is a great batsman and has achieved more than anyone else in the world. He just needs to go out there and play with his natural flow."

"He plays a lot with his bottom hand and I think when the form is out, bottom hand players usually are the first ones to get in trouble. I think he's gonna come out of this. He should move forward from this and not keep any bitterness against anyone. Just forgive everybody and keep moving," he added.

Kohli was appointed Test skipper in 2014 taking over the reins from Mahendra Singh Dhoni and ended as India's most successful captain.

The 33-year-old decided to give up T20 captaincy before he was removed as ODI skipper, creating a rift between him and BCCI's top-brass.

Akhtar saw it coming having seen the division in the Indian dressing room during the T20 World Cup.

"I knew that was coming. I was in Dubai during that time and I knew every bit of it. I knew the whole scenario and what was happening in the Indian dressing room from my friends in India."

"There were people against him. So I wasn't surprised at his decision to quit. It's not an easy job," said the Rawalpindi Express.

"No, Indian cricket is not going down. You have to take control of the situation. Rahul Dravid has a big job in his hands."

"I hope people don't say that he's an overrated coach. He has to prove that, and obviously he has big shoes to fill in the place of Ravi Shastri. He has a big task ahead, let's see how he performs."

India had won the first Test but lost the next two as a win in the Rainbow Nation remained elusive for India.

You've to change fast bowlers, like you change tyres

India have seen a golden age in their pace attack with the likes of Ishant Sharma, Mohammed Shami and Jasprit Bumrah leading the team to some memorable victories in Australia, England and South Africa.

"They have made very healthy progress. Yes I'm very impressed, hope more such fast bowlers keep coming from the sub-continent and they keep performing.

"I love everyone, I love Bumrah, Shami is great... It will be good fun if they also start developing an attitude like the Pakistanis," said Akhtar.

But with the likes of Ishant, Shami, Umesh Yadav and Bhuvneshwar Kumar in the fag-end of their career, it's time to think beyond them, he felt.

"They are like the 'wheels' of the team. Of course, you have to replace them like you change 'tyres'. They also need a bit of rest in between and you also have to make them perform.