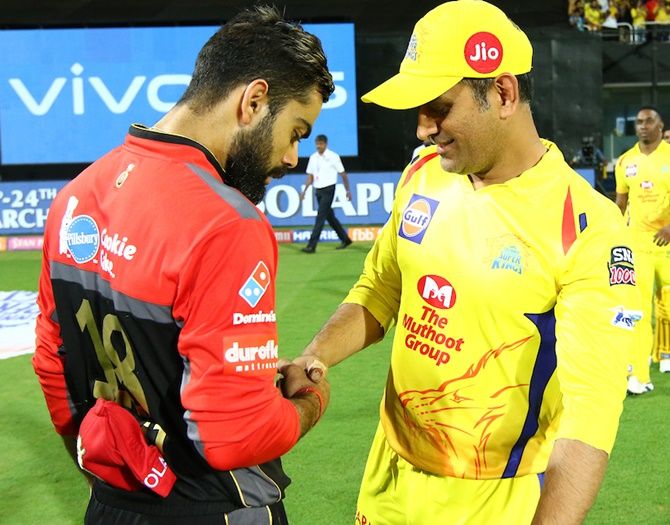 IMAGE: The Kohli-Dhoni relationship has a lot of mutual admiration. Photograph: BCCI

Virat Kohli hasn't forgotten the times when Mahendra Singh Dhoni firmly stood by him as a captain and now that the roles have reversed, he is not going to back down from supporting the veteran despite the 'unfortunate criticism' that the former skipper is coping.

The Indian captain also expressed his happiness with the composition of the 15-strong Indian squad for the World Cup in an interview to 'India Today'.

"It's unfortunate to see so many people going after him. For me, loyalty matters the most," Kohli's words showed his reverence for his first international captain.

"When I walked into the team he had the option of trying someone else after few games, although I grabbed my chances but for me to get that kind of backing, it was very crucial for me."

"Also, he gave me an opportunity to bat at No 3 because not many youngsters get to play at No 3," the skipper recalled his formative days in international cricket.

When an astute brain meets a superlative performer, there is bound to be lot of mutual admiration and the Kohli-Dhoni relationship is no different.

"It's just about the field placements and bowling changes and we say you know the angles, you know the pace of the pitch and that's why there is so much of trust and respect between the two of us," he said.

As he has said earlier, Kohli again reiterated that there are no peers to Dhoni when it comes to reading match situations.

"He is one person, who literally knows the game inside out. He understands the game from 'Ball 1 to Ball 300 (50 overs) on the field. I won't say its a luxury to have him but I am fortunate to have a mind like that from behind the stumps," Kohli said.

It is Dhoni's presence behind stumps that has ensured that Kohli with one of the strongest arms can afford to field in the deep.

"At the end of the day, I want to be involved in strategy with the team management with Mahi bhai and Rohit."

"In the death overs, I know that I have to be on the outfield to try and make something work for the team because that's my nature that I want to do something for the team rather than just be there."

"After 30-35 overs, he knows that I will be in the outfield and its on the auto mode," he explained.

While he didn't elaborate about his take on the debate on the World Cup squad, he didn't forget to give it his stamp of approval.

"We are very happy with 15 that we have. This is the most balanced side we could have thought of because everyone is in a good space," the skipper said without getting into the debate about the much talked about omissions of Rishabh Pant and Ambati Rayudu.

For him, a chilled out dressing room atmosphere with the skipper himself, Dhoni and vice-captain Rohit Sharma has made it easy for the players to express themselves.

"I think the whole management group, the way they have handled the entire group, it creates a good environment where everyone is relaxed. Our change room is like a living room, chilled out with everyone relaxed," he said.

"Indian team has to be paramount and everyone and players responded in a very positive manner right from the management, myself, Mahi bhai being the senior most guy and everyone. There is one goal and everyone is in sync with that goal."

While the World Cup now occupies his mind space, he said that he doesn't need to switch buttons as the intensity always remains the same.

"To understand the magnitude of a tournament like this from a captain's point of view is a different ball game. I won't say that I will look to do something different just because its a World Cup. Fortunately, I am in the mindset, I don't have to pick myself up for a series, because I always have the same intensity and drive to take the team over the line.

"Even though players are playing the IPL but the anticipation is for the World Cup and you can see that energy the way everyone is playing."