India will wonder where K L Rahul fits in their ODI team while Virat Kohli's impact as a batter has diminished considerably, notes Harish Kotian. IMAGE: Virat Kohli and K L Rahul failed to live up to expectations as India suffered a 0-3 series whitewash in the ODI series in South Africa. Photograph: Hagen Hopkins/Getty Images

It was one of India's worst away tours in recent times as they suffered an embarassing 0-3 ODI series whitewash in South Africa to follow up on the Test series loss.

South Africa, who were missing their frontline pacers Anrich Nortje and Kagiso Rabada and had only Quinton de Kock as their only star in the batting department, gave the Indians a lesson on how to play ODI cricket.

While South Africa's batters made most of the middle overs by milking the Indian spinners easily for runs at a fair clip, their inexperienced spinners proved to be too hot to handle for some of India's world class batsmen.

ODI Captain Rohit Sharma's absence because of injury was a big blow for the Indians, as K L Rahul didn't show leadership skills on the field nor did he make an impact with the bat.

India will wonder where Rahul -- who will struggle to get into the playing XI if regular openers Rohit and Shikhar Dhawan are fit to play -- fits in their ODI team.

The Virat Kohli-Ravi Shastri combine had played Rahul in the middle order in recent series, entrusting him with the job to get the big hits at the end.

In his last three ODI series before South Africa -- in New Zealand in February 2020, in Australia in November-December 2020 and against England in March last year -- Rahul had batted at No 5, playing the role of a finisher.

He scored two centuries and three fifties in nine innings, giving India another option in the middle order.

After taking over the captaincy in South Africa in Rohit's absence, Rahul returned to open the innings and struggled to make a mark, with scores of 12, 55 and nine for a series strike rate of 71. He was slow to get going in the early overs in the Powerplay, taking his time to get his eye in, but was unable to carry on, which left a lot of work to do for the middle order.

Rahul averages a healthy 46 in 41 ODIs, but as we witnessed in South Africa and in the IPL too, he has got into the mode of starting off slowly and looking to bat as long as possible, which is not yielding results.

The other big worry for India will be the impact of Virat Kohli the batter.

While Kohli was seen helping Rahul with the tactics at times during the games, he seemed mostly content to patrol the boundary unlike the Kohli of the past, who was always fielding close to the batsmen, trying to get under the skin of the opposition batters and distract them somehow with his aggressive demeanour.

India will hope Kohli gets back his magical batting form from a few years ago when he used to consistently take India across the finish line in run chases.

Even though Kohli hit two fifties in three games in South Africa, his batting didn't make the same impact as he scored 116 runs at a strike rate of 76.

With Kohli not in top form and Rohit missing, India's batting prowess was reduced considerably which put a lot of stress on the young batters in the middle and lower order.

Kohli's diminishing returns with the bat in recent years can be gauged from the fact that he hasn't hit a century in ODIs in nearly 30 months.

His last ODI century came way back in August 2019 when his 114 not out steered India home to a six-wicket victory in a rain-affected game against the West Indies in Port of Spain. IMAGE: Rishabh Pant walks back after getting dismissed for a first-ball duck in the third ODI against South Africa, January 23, 2022. Photograph: Grant Pitcher/Gallo Images/Getty Images

With Kohli not at his best, the middle order has been under a lot of pressure with the likes of Shreyas Iyer, Suryakumar Yadav and Rishabh Pant not making the most of their opportunities.

The free-flowing Suryakumar with his range of shots is a good bet for the No 4 or No 5 position, but the team management went ahead with Shreyas who managed just 54 runs in the three games.

Pant needs to be more selective with his shot selection and more consistent in the bat. He impressed everyone with his 71-ball 85 in the second game, but stunned them with his first-ball duck in the final game, caught behind as he stepped out to medium pacer Andile Phehlukwayo to smash him out of the ground.

In the absence of the dashing duo of Hardik Pandya and Ravindra Jadeja, India have lacked the firepower in the death overs.

Venkatesh Iyer was a big hit, opening the bat for KKR in the IPL last year, but could not find the same success playing in Hardik's place lower down the order as he scored just 24 runs in two games and was dropped for the third match. Intriguingly, after declaring that he needed a medium pace bowling all-rounder before the ODIs, Rahul did not bowl Iyer in either game.

Senior spinner Ravichandran Ashwin, playing his first ODI in more than four-and-a-half years, was a huge disappointment. He took just one wicket in the first two games, went for more than six runs per over and was unable to keep things in control in the middle overs.

Yuzvendra Chahal fared slightly better -- his economy rate was just over five, but he too managed just two wickets in the three games.

The Indian batters's lack of intent against the South African spinners was also a major factor. Keshav Maharaj took three wickets at an economy rate of 4.5 while part-time spinner Aiden Markram (5) and unorthodox spinner Tabraiz Shamsi (5.73) also went under six per over as they stifled the Indian batters in the middle overs. 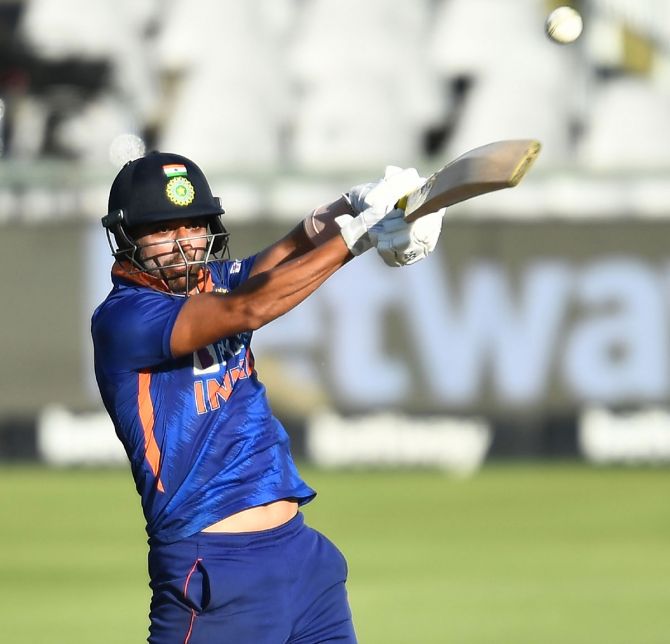 The only positives from the ODI series was Deepak Chahar and Shardul Thakur's excellent showing with the bat. Chahar nearly snatched victory from the jaws of defeat, but his dismissal after a whirlwind 54 from 34 balls saw India cave in with three wickets falling for five runs at the end in the third ODI.

Bhuvneshwar Kumar could be shown the door after his lacklustre showing in the ODIs while Chahar, Thakur and Prasidh Krishna could be given more opportunities.

The three-match ODI series against the West Indies at home will give India a chance to try out new players including leggie Ravi Bishnoi, dashing wicketkeeper-batter Ishan Kishan, batting stars Ruturaj Gaikwad and Shubman Gill, pacers Avesh Khan and Harshal Patel -- all of whom have impressed in the IPL.

The IPL will also be a good platform for some of India's domestic players and young stars to put themselves in contention for a place in the Indian ODI and T20 teams.

The sudden change of captaincy and the drama around it could have impacted the team atmosphere, but trust Head Coach Rahul Dravid to settle down the dressing room and get back India to winning ways.

India went into the 2019 World Cup with a shaky middle order and were outclassed by New Zealand in the semi-final. Unless they getting their batting and bowling sorted out soon, the 2023 World Cup looks another distant dream for the Men in Blue.