'CAC hasn’t contacted me yet. If they tell me we want your opinion, yes I will definitely go and speak to them. And with Ravi bhai, all of us have a great camaraderie' 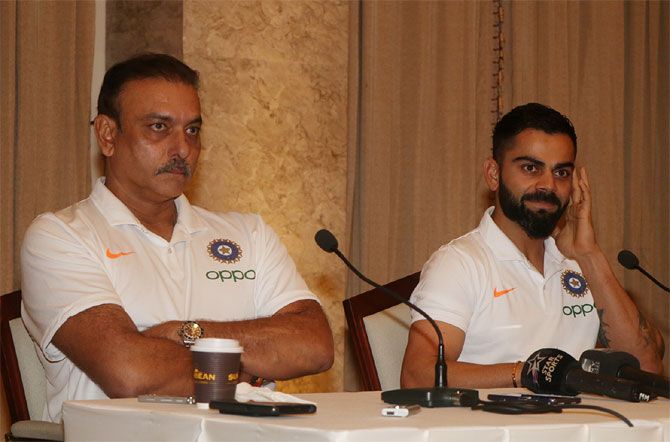 Captain Virat Kohli gave his firm backing to Ravi Shastri to continue as the coach of Team India.

The Indian team’s new coach will be named after the forthcoming tour of the West Indies, which will be played from August 3 to September 3.

The Cricket Advisory Committee, led by former captain Kapil Dev and comprising former women's captain Shantha Rangaswamy and former men's coach Anshuman Gaekwad, has been entrusted with the task of picking the next India coach.

Shastri has been handed an extension till the end of the West Indies tour.

The former India all-rounder was appointed in 2017. He succeeded former captain Anil Kumble, who stepped down after a fall out with skipper Kohli. Shastri also served as the director of cricket of the Indian team from 2014 to 2016.

Under Shastri's guidance, India won a maiden Test series in Australia earlier this year and are ranked number one in Tests. They also reached the semi-final of the recently-concluded ICC World Cup.

Interestingly, it has been reported that, unlike in the past, Kohli will no say in selection of the new coach.

However, the Indian captain made it clear that he and the team will be happy if Shastri gets the nod.

“Look, the CAC hasn’t contacted me yet. If they tell me 'we want your opinion', yes I will definitely go and speak to them. And with Ravi bhai, all of us have a great camaraderie. Everyone in the team shares mutual respect and we have done really well together as a group. We will definitely be very happy if he continues as the coach,” Kohli said, in Mumbai, on Wednesday, on the eve of Indian team’s departure to the West Indies.

Kohli also revealed that neither Kapil nor any of the CAC members have not contacted him yet, to seek his opinion on the coach selection process.

“Look, the CAC hasn’t contacted me yet. If they tell me we want your opinion, yes I will definitely go and speak to them. But as I said, it’s for the CAC to seek my advice or opinion if they want. Right now, I haven’t been contacted at all. I don’t know what’s going to happen in the process and that’s where it stands,” he said.

Meanwhile, Shastri also seemed satisfied with how the Indian team had fared under his tenure.

“You look at the sheer consistency across all formats, it’s been magnificent. We live and we love. Even in the World Cup, we have played some outstanding cricket. If you look at the intensity, the consistency, it was great to see.”

“What I saw from the dressing room, I was thoroughly impressed. You live and you learn. We could have learned a lot in those 30 minutes at the start of the chase against New Zealand. That’s what we live for.

If you look at (the last) 18 months, we have had a great ride in Test cricket, we have had a very good run in ODIs as well. We are No 1 in Test cricket, we are No 2 in the one-day game and we are not that far in T20 cricket. You can’t ask for more. Yes, if we would have won the World Cup, that would have been icing on the cake, but you can’t take away anything from the boys the way they have performed,” he trailed off.