'In my opinion he has taken on more challenges and succeeded at all of them. He's the most complete player I have seen and his work ethic, as I mentioned, is unmatched.'

Cristiano Ronaldo may not be the most popular footballer in South Korea at the moment but he has an ardent fan in India cricket captain Virat Kohli, who changes his club allegiance every time the Portuguese forward is transferred.

Lionel Messi and Ronaldo have dominated the global football landscape for a decade, each winning the Ballon d'Or five times before Croatia international midfielder Luka Modric broke their stranglehold by claiming the coveted award last year.

Kohli is arguably the best batsman of his generation across formats and became the first to win the International Cricket Council's cricketer, test and one-day international player of the year awards together for a phenomenal 2018.

The 30-year-old rates former Real Madrid and Manchester United Ronaldo as the best he has seen.

"For me, Cristiano is above everyone else. His commitment and work ethic is unmatched. He wants it that bad -- you can see it every game," Kohli told the FIFA website (www.fifa.com).

"In my opinion he has taken on more challenges and succeeded at all of them. He's the most complete player I have seen and his work ethic, as I mentioned, is unmatched.

"He inspires people. I don't think many people do that. He's also a leader and I love that. Absolutely love it. He has amazing belief too."

The Portuguese player with a huge fan following across the globe has, however, riled up his fans in South Korea who are exploring legal action to seek compensation after Ronaldo failed to play in a friendly during Juventus' pre-season tour in Seoul last week. 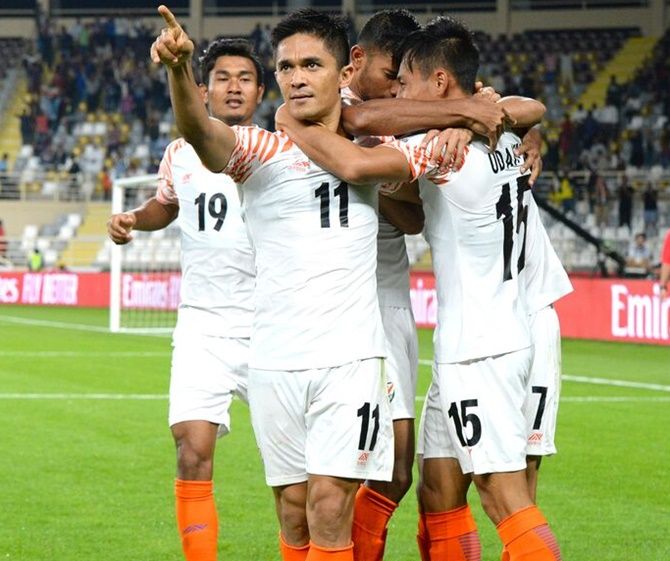 IMAGE: 'If anyone deserves it (to play in the World Cup), it's Sunil Chhetri'. Photograph: AIFF Media/Twitter

"I like watching Portugal play now because they are maximising their resources along with having a legend in their team," Kohli added.

"They play with passion and belief, so I like watching them. Otherwise, in terms of pure ability and impact, France are very, very strong.

"I support Juventus now because of Cristiano. Simple. I support every club at which he plays. He inspires me."

French forward Kylian Mbappe, 20, is Kohli's choice to rule the football world after Ronaldo and Messi.

"His sprint in the 2018 World Cup against Argentina is hard to forget," Kohli said.

"He's a beast and he will definitely be at the top of the pile for me. Absolutely top-class player."

Lauding the efforts of Indian football captain Sunil Chhetri, Kohli said he was very optimistic about India's chances of qualifying for the football World Cup.

"We are not far off. We have improved drastically in our football over the last three-four years. With new talent coming in to make the difference, and our skipper Sunil Chhetri leading the team with amazing composure and inspiration...

"If anyone deserves it (to play in the World Cup), it's him. And the team should rally behind that motivation and qualify, and dedicate it to him. He's an absolute champion and an inspirational human being," Kohli said.