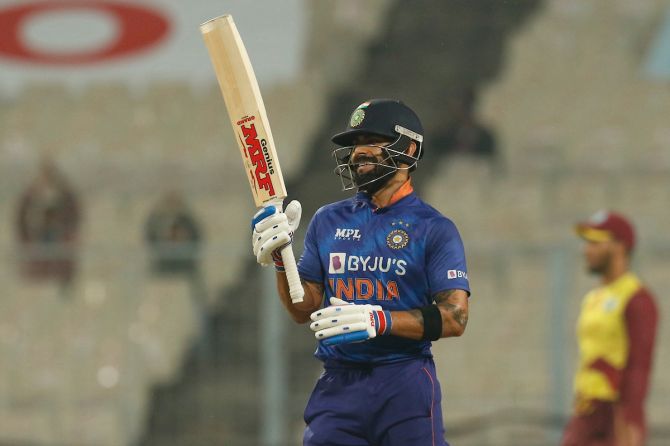 IMAGE: India's Virat Kohli celebrates after completing a half-century, his 30th, in the second T20 International against the West Indies, at the Eden Gardens in Kolkata, on Friday. Photograph: BCCI

Former India captain Virat Kohli expressed satisfaction with his knock in the second Twenty20 International against the West Indies, in Kolkata on Friday, saying he was determined to stay positive as went out to bat.

Kohli had registered scores of 8, 18, and 0 in the ODI series against the West Indies, and in the first T20I the right-handed batter was dismissed for 17.

However, he displayed his vintage shots in the second T20I to play a quality knock of 52 and post his 30th fifty in the shortest format, his first since the 57 versus Pakistan in the T20 World Cup on October 24, 2021.

"I had decided when I went in to stay positive, but then we lost a few wickets. I still wanted to keep going but, unfortunately, I got out.

“I was happy with my intent that I wanted to play my shots. Sometimes you play with responsibility. Over a period of time you tend to ask if you want to play the big shots early," Kohli told host broadcaster Star Sports after India's innings.

"You don't want to be reckless but, at the same time, you want to play your shots. That is the balance you strive for. Today I was happy with that balance. The wicket was gripping in the middle, so if we are smart with the ball we have got enough.

“Special mention to Rishabh (Pant) and Venky (Venkatesh Iyer) in the end. They have got us those 10 extra runs," he added.
Pant (52 not out) and Venkatesh Iyer (33) made vital contributions as India finished with 186 for 5.

The pair was involved in a 76-run stand for the fifth wicket.
In the final six overs, India scored 76 runs.