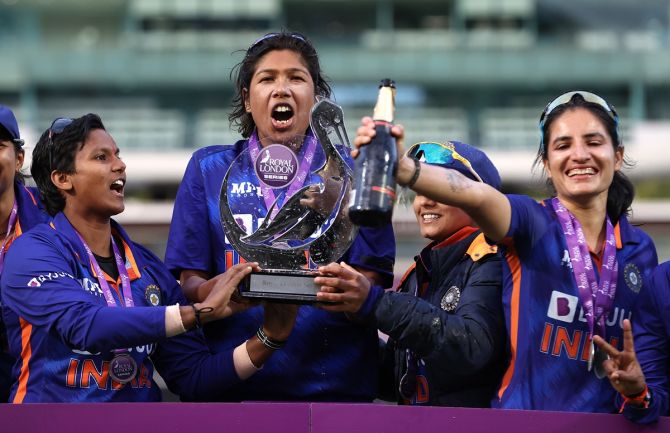 Star India batter Virat Kohli on Saturday said legendary pacer Jhulan Goswami has inspired many women to take up the sport through grit and determination.

Jhulan Goswami, who had a successful 20-year international career, played her last game on Saturday where India defeated England by 16 runs and sealed a three-match ODI series win 3-0.

Kohli congratulated Jhulan on a stellar international career and said the pacer has always stood out due to her aggression on the field.

"A great servant of Indian cricket. Congratulations on an outstanding career, inspiring so many women to take up the sport. Your grit and aggression always stood out. I wish you the very best," Kohli said on the Koo app.

Interestingly, Kohli's wife Anushka Sharma will portray the outstanding journey of Jhulan Goswami. The film will stream exclusively on the OTT platform and the final release date of the film is still awaited.

The International Cricket Council (ICC) hailed iconic India pacer Jhulan Goswami for her "exceptional international career" that saw her finish as the world's most successful bowler in women's ODIs.

The 39-year-old fast bowler, who retired from international cricket after India's 16-run win over England in the third and final ODI in London, played in five ICC Women's World Cups including in 2005 and 2017, when India made the finals.

ICC Chief Executive Geoff Allardice praised Goswami's longevity and said she would be remembered as one of the greats of the game.

“Jhulan has had an incredible career over two decades, enjoying great success across formats. For a fast bowler to continue for so long is amazing and it is no wonder that she leads the list of wicket-takers in Women's ODIs," Allardice said in an ICC release.

“Jhulan's career span included a crucial period of growth for women's cricket and her presence helped raise the profile of the game. I am sure many young boys and girls in not just India but around the world would have been inspired by her over the years. On behalf of the ICC, I congratulate Jhulan for a wonderful career.”