Kohli, Pant get break from bio-bubble; to skip SL T20Is 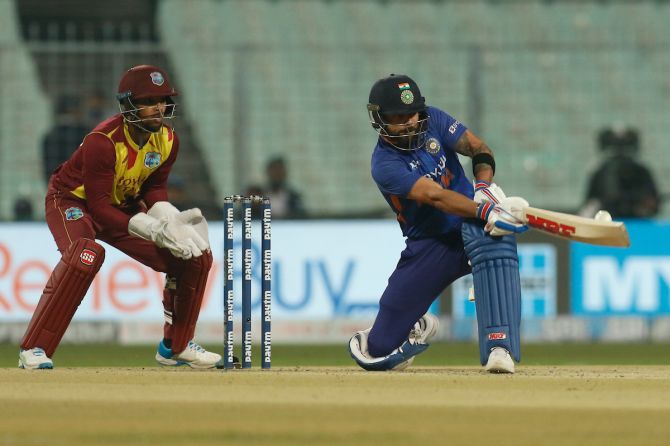 IMAGE: Virat Kohli bats during the second T20 International against the West Indies, at the Eden Gardens in Kolkata, on Friday. Photograph: BCCI

The Board of Control for Cricket in India has given Virat Kohli and wicketkeeper-batter Rishabh Pant a 10-day break from the Indian team's bio-bubble. Both left for home after the second T20 International against the West Indies, in Kolkata, on Saturday.

They will not play in the three-match T20 series against Sri Lanka, beginning on February 24 in Lucknow.

The other two matches against the Lankans are at Dharamsala on February 26 and 27.

"Yes, Kohli has left home on Saturday morning as India have already won the series. As it has been decided by BCCI, it will be a policy to give all the regular all format players periodic breaks from the bubble to ensure that their workload management and mental health is taken care of," a senior BCCI official privy to the development said on the condition of anonymity.

The Indian team for the Sri Lanka series will be picked later in the day.

Kohli was his vintage self in the second T20I against the West Indies at the Eden Gardens on Friday, scoring a quality 52, his 30th fifty in the shortest format, and first since the 57 versus Pakistan in the T20 World Cup on October 24, 2021.

India won the match by eight runs to take a 2-0 lead in the three-match series.