With 11,406 runs in 238 innings Virat Kohli is the second highest run-getter for India in ODIs 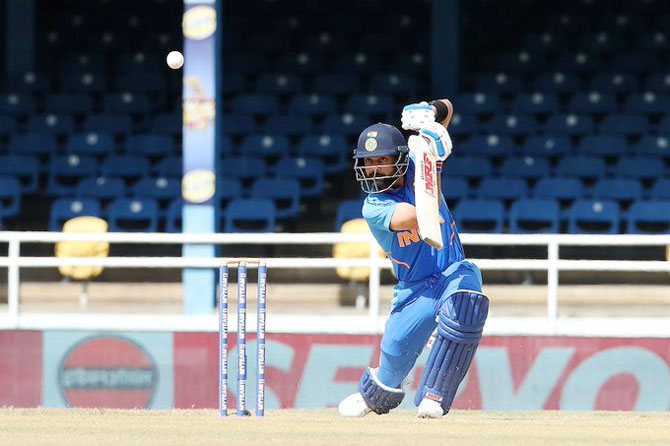 India’s captain attained the feat during the second ODI against the West Indies when he hit Jason Holder for a boundary in the 32nd over.

The 30-year-old, who had a relatively quiet World Cup in England, went on to score his 42nd ODI century, his first since March, as India registered a 59-run win to take a 1-0 lead in the three-ODI series on Sunday.

"Virat Kohli another master class in one day cricket @imVkohli @BCCI.. what a player," Ganguly wrote on Twitter.

Kohli is now only behind Sachin Tendulkar, who has scored 18,426 runs in his illustrious ODI career. Kohli is also seven hundreds short of Tendulkar's record of 49 ODI hundreds.

Overall, Kohli is in the eighth spot in the list of highest run-scorer in ODIs.

Earlier in the day, he shattered a 26-year-old record when he surpassed Pakistan's Javed Miandad for most runs by any batsman in ODIs against the West Indies.

Kohli was 19 runs shy of the landmark when he came into bat in the second ODI against the West Indies and he overtook Miandad's tally of 1930 runs with a single in the fifth over bowled by Jason Holder.

This was Kohli's 34th ODI against the West Indies while Miandad had accumulated his runs from 64 matches.

The prolific Indian captain has so far hit seven hundreds against the West Indies and has an average of over 71 in ODIs against the Caribbeans.     Australia's Mark Waugh is a distant third with 1708 runs from 47 matches, followed by South Africa all-rounder Jacques Kallis (1666 runs in 40 matches) and Pakistan's Rameez Raja (1624 runs in 53 matches).

Kohli's domination against the West Indies can be gauged from the fact that he struck four back-to-back centuries against them between July 2017 and October 2018.