'If you field like that, then no total is big enough' For someone who often leads by example, India captain Virat Kohli is appalled by the team’s sloppy fielding against West Indies and wants them to fix the problem in the build-up to next year’s Twenty20 World Cup in Australia.

India, who had dropped five catches in the series opener on Friday, spilled three more on Sunday to allow West Indies to level the series 1-1 in Thiruvananthapuram.

The unusually sloppy catching in Hyderabad prompted former all-rounder Yuvraj Singh to wonder if playing too much cricket was taking its toll on the players.

Some of the players said the low floodlights in Hyderabad made sighting the ball tricky at times. No such excuse was offered for the slip-ups in Thiruvananthapuram, where two catches went down in a single Bhuvneshwar Kumar over.

“Look, if you field like that, then no total is big enough. Last two games we’ve been below-par in the field,” Kohli told broadcaster Star Sports after Sunday’s defeat.

“In the first four overs we created enough pressure and then you drop two chances in a T20 game in one over, that’s going to cost you. If they lose two wickets in one over, the pressure’s on them."

“I think it’s a game of margins and we need to understand where we went wrong. It’s pretty evident. It’s there for everyone to see and for us to improve on."

“I think fielding is something we need to be more brave about, and not worry about dropping catches.” 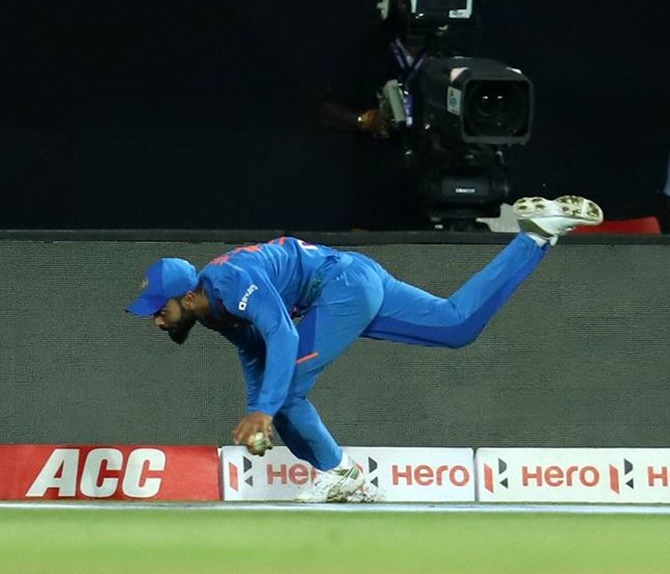 Kohli himself set the standard when he pulled off a spectacular one-handed catch near the ropes to send back Shimron Hetmyer.

“It was one of those catches that just stuck in the hand,” said Kohli.

“It came out of the lights a little bit, but I just committed to the ball and put both hands out, and luckily it came into my hand.”

Mumbai hosts the third and final match on Wednesday.