'Have had a few collapses that have cost us important moments and Test matches. It's batting; can't pin-point any other aspect.' 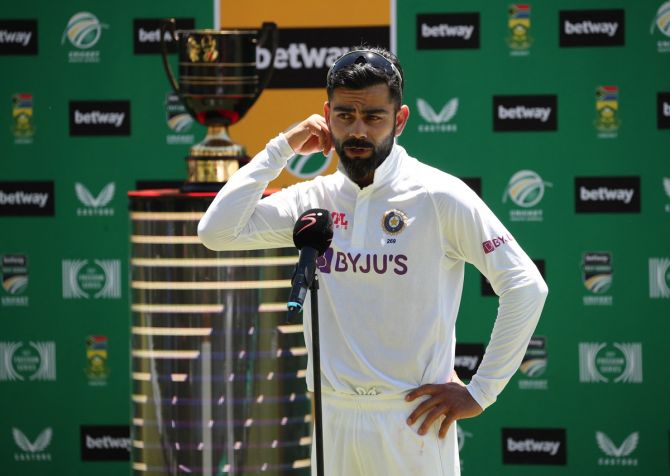 "No running away" from India's batting collapses every now and then, declared captain Virat Kohli after his team squandered a 1-0 lead and a golden opportunity to script a maiden Test series win in South Africa.

Besides a batting failure, Kohli listed inconsistency, lack of application, lapse in concentration and their inability to seize the crunch moments as reasons for the India’s defeat in the three-match rubber, which the hosts prevailed 2-1.

"The batting has to be looked into; no running away from that. Having collapses every now and then not a good thing," said Kohli, at the post-match presentation ceremony after South Africa emerged winners by seven wickets in the series-deciding third Test, in Cape Town, on Friday.

India won the series-opener in Centurion by 113 runs but, surprisingly, caved in against an inexperienced South African team in the next two matches, their batters letting them down on more than one occasion.

Kohli though gave credit to his opponents for the manner in which they staged the turnaround, a day after losing his cool over a decision review.

"We had a great first game, but South Africa did amazingly well. In both Tests they won, they were clinical with the ball in crunch moments.

“Lapse of concentration cost us key moments and they seized those moments; South Africa were absolutely deserving winners in the end."

The star-studded Indian team thus failed to add to its incredible triumph in Australia last year, and Kohli attributed it to its inability to grab the key moments and capitalising on the momentum.

"As I said, one of the challenges we've faced touring abroad is make sure capitalising on momentum, when we've done that we've won Tests away from home. When we haven't, they've cost us quite bad."

Speaking about the areas that require immediate attention and where they lost out to the Proteas, Kohli said, "Have had a few collapses that have cost us important moments and Test matches. It's batting; can't pin-point any other aspect.

"People talk about pace and bounce, considering their heights, they were able to get much more off the wickets in all three Tests. They applied pressure long enough for us to make mistakes. It's the understanding of conditions for them which they know very well."

Kohli was impressed by KL Rahul and Rishabh Pant's centuries, counting them as the positives from the series.