'Looking at the Indian team, that (inexperienced bowling attack) is an area we are going to take advantage of just like I suppose, you look at opposing teams and at areas, which you can take advantage of' 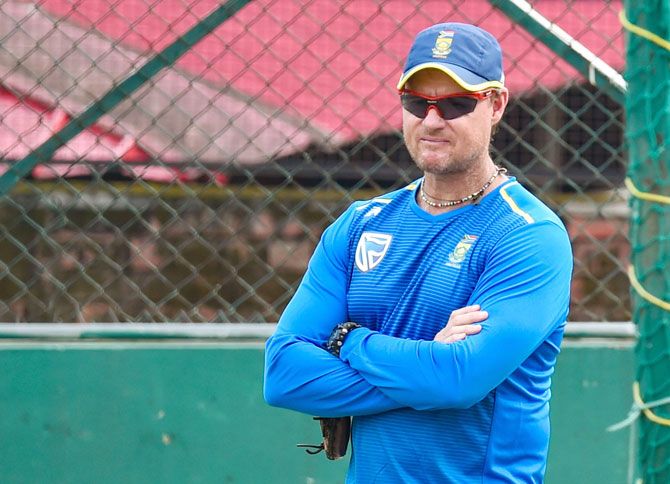 The trio has together played 16 T20 Internationals between them and the former South African all-rounder senses an opportunity for the Proteas as their new look team tries to settle into a groove.

"Looking at the Indian team, that (inexperienced bowling attack) is an area we are going to take advantage of just like I suppose, you look at opposing teams and at areas, which you can take advantage of," Klusener said during a media interaction on the eve of the first T20 International.

However he made it clear that by no means he underestimates the Indian attack.

"They are great cricketers and we are not taking anything away from that and our focus will be on ourselves and little areas that we can take advantage of and maybe that's one of them," he said.

One of the hardest hitters of the cricket ball during his playing days, Klusener was asked about what he expects from a player like Temba Bavuma, whose game is not naturally suited to the demands of T20 cricket.

"He recently got a hundred in the CSA (domestic) T20 final. It's easy to pigeonhole him and say okay he plays Test cricket. But Temba is wonderful all-round cricketer. Yes he needs to learn a couple of all-round options and that's really about it,” Klusener defended the pint-sized batsman's selection.

However, he agreed that Bavuma's game will be more about rotating the strike and give opportunities to big hitters like David Miller, Dwayne Pretorius or Andile Phehlukwayo.

"He is not the biggest guy, who can muscle the ball over the fence, but there are different ways of doing it. I am uncomfortable saying he is a red-ball cricketer. He has played two ODIs with a hundred and a fifty, so he is a good cricketer," the 48-year-old said.

"He will certainly get his opportunity on this tour and I think he is ready to make transition into being somebody in that engine room, who can be good at rotating strike and have good plans so that other hitters like David, Dwayne and Andile, some of the biggest hitters on the planet, can bat around him," he further added.

Playing in India is a different challenge from other overseas conditions as it's not just about adapting to the pitches but also to conditions and the culture of the place, feels Klusener, who has had some memorable performances during South Africa's tours of 1996 and 2000.

"The biggest challenge playing in India is conditions, and that's not necessarily the wicket but also the weather. Full press conferences, lot of things you have to deal with.

"It's a wonderful challenge, not everybody had privilege whether you have played here for South Africa A to play in full noisy stadiums, which will wake you up in morning and there are a lot of things off the ball that you have to deal with it as well. Once you can get your mind and head around it, it makes playing a lot easier," he added.