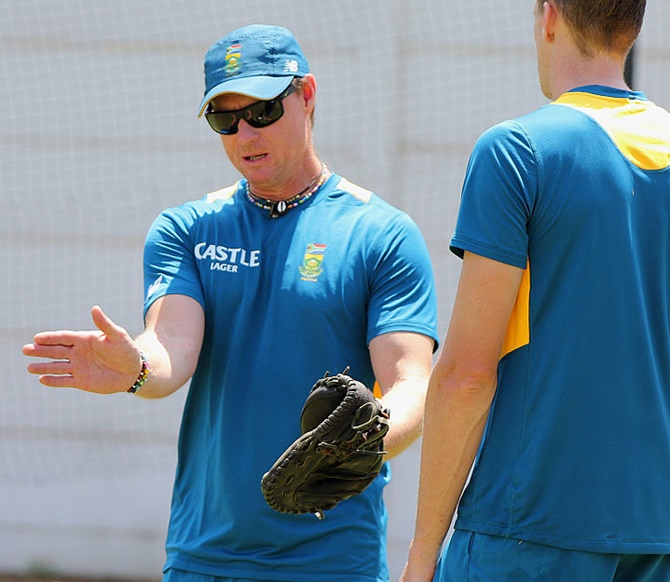 Former South Africa all-rounder Lance Klusener was, on Friday, appointed as the assistant batting coach of the national team for the three-match Twenty20 series against India in September.

"In terms of the new team structure the Team Director appoints his three assistant coaches who have specific skills focus in the three key disciplines of batting, bowling and fielding," CSA Acting Director, Corrie van Zyl, said in a statement.

"Former Proteas all-rounder Lance Klusener will fill the role of assistant coach (batting) for the T20 Series only as he is currently not available for all formats."

Klusener, considered one of the best all-rounders of his generation, has collected 1906 runs and 80 wickets in Tests, as well as 3576 runs and 192 wickets in ODIs.

He took up coaching with domestic side Hollywoodbets Dolphins from 2012-2016 before being appointed as batting coach for the Zimbabwe national team.

In July this year, he was appointed as the head coach of the Glasgow Giants for the cancelled inaugural edition of the Euro T20 Slam cricket tournament.

"His record as one of the best all-rounders in the world, particularly in white ball cricket, during his playing career speaks for itself and he also has extensive coaching experience both at franchise and international level," van Zyl said.

Barnes has a long history with the Proteas, having served as the bowling and then assistant coach from 2003 until 2011.

"Vincent Barnes will be the assistant coach (bowling). He also has extensive coaching experience at international level and his knowledge of playing conditions in India will make his contribution invaluable. Vincent currently also fills the role of the HP Bowling Lead for CSA."

Ontong, who has represented the national side in all three formats, also served as South Africa's fielding coach under Ottis Gibson before the restructuring.

"Justin Ontong will fill the role of assistant coach (fielding). He has built up a strong relationship with the players over the last two years and is an acknowledged expert in this department," the statement said.

Van Zyle also said: "Team director Enoch is targeting a batting coach who has extensive knowledge of Indian conditions for the Test series and we will be in a position to announce this successful candidate shortly."

Van Zyl added that all the technical staff -- performance analyst Prasanna Agoram, strength and conditioning coach Greg King and physiotherapist Craig Govender -- will continue in their positions, although Govender will be replaced temporarily for the India tour after he had knee surgery.