'Way Mohsin is going, he will be playing for India soon' 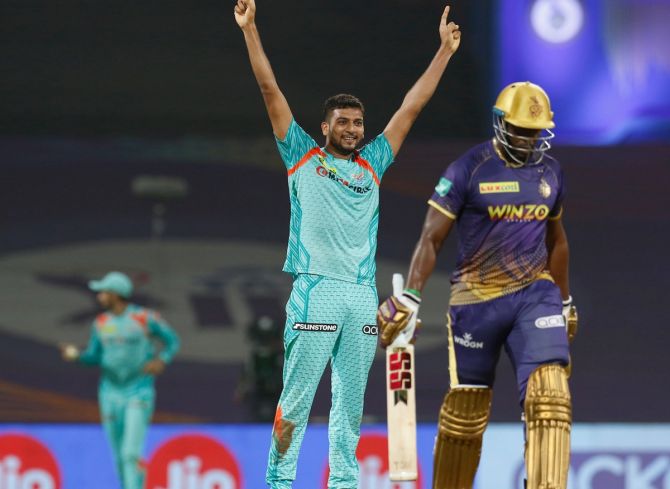 They defeated Kolkata Knight Riders (KKR) by two runs in a final over thriller at the DY Patil Stadium on Wednesday.

Winning captain K L Rahul was relieved to finish on the right side of the result.

"I should probably get paid more for games like these. Could easily have been on the losing side and have gone back home thinking we lost due to some poor cricket. Good way to finish the last game of the league season. Credit to both teams to make such a brilliant game of cricket.

"Can't say we held our nerves better because it was a matter of three runs. For Stoinis to execute those plans in the last two balls to get us the win, was brilliant," said Rahul.

Talking about Quinton de Kock, who struck a superb unbeaten 140 to set up the win for LSG, Rahul said: "I was a spectator today in the last few overs. He (De Kock) was striking the ball so crisply and cleanly."

"What we lacked in some of the games were that the guys who were having good days weren't winning us games. Guys getting 30s and 40s had to get us 80s and 90s, and that's exactly what he did."

He was also all praise for left-arm pacer Mohsin Khan, who returned with three wickets.

"Mohsin has been outstanding for us in the last few games. He's got the skills but the key thing has been his knowledge of when to use those skills.

"He'll be donning the Blue jersey soon the way he is going. India is always looking for left-arm pacers and he is right there," said Rahul.