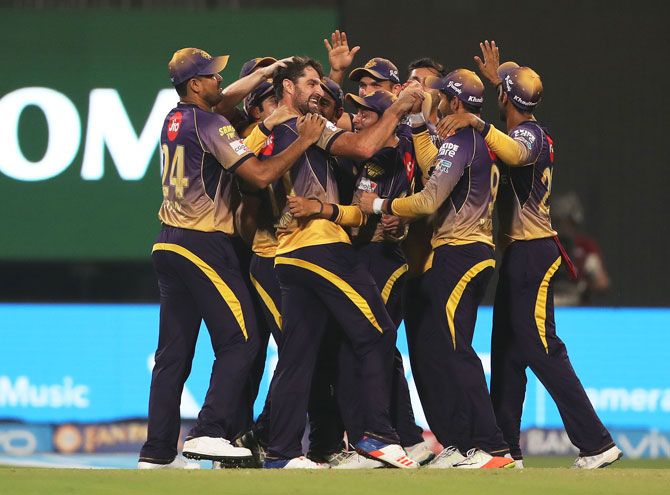 Having sealed their play-offs spot after a resounding victory in their previous match, Kolkata Knight Riders would be aiming for a top-two finish with a win when they take on an inconsistent Kings XI Punjab in their Indian Premier League match, in Mohali, on Tuesday.

KKR bounced back from their back-to-back defeats when they registered an easy six-wicket win over Royal Challengers Bangalore, in Bengaluru, on Sunday.

The Gautam Gambhir-led side are second in the league table with 16 points from 12 matches with the help of eight wins and they would look to consolidate their position with a win over Punjab, who suffered a six-wicket loss against Gujarat Lions.

KKR showed why they are one of the strongest teams in this IPL when they took apart Virat Kohli-led RCB in their previous game. Chasing a modest 159 for victory, KKR's openers -- Chris Lynn and Sunil Narine -- gave their team a blazing start as they race to 105 for no loss in just six overs,  a record total in the six overs of Powerplay in the IPL.

They cruised to victory with 29 balls to spare on the back of Sunil Narine's (54 off 17 balls) record joint fastest IPL fifty -- from 15 balls -- and an equally aggressive knock from Chris Lynn (50 off 22 balls). 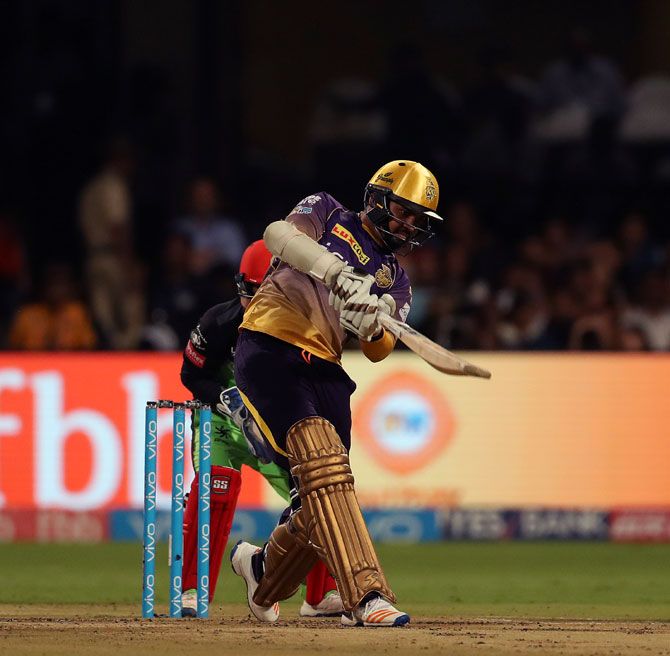 After the match, Gambhir said that 105 in six overs was unbelievable and it was the best partnership he had seen in his entire career.

KKR will, however, need to watch out in so far as they have been cashing in on the hit-and-miss experiment of using Narine at the top. When Narine gets going, there was no stopping them as more often than not Gambhir and Robin Uthappa have capitalised on the solid starts given by the West Indian.

Narine has come out as an opener in nine matches out of KKR's 12 so far in IPL-10 and the West Indian has made most by smashing 196 runs at an amazing strike rate of 184.

KKR's other batsmen like Colin de Grandhomme, Manish Pandey and Yusuf Pathan will also look to get back among the runs ahead of the play-offs.

Umesh Yadav, Chris Woakes and Narine will be the main bowlers on whom KKR will mainly bank upon with Ankit Rajpoot and Piyush Chawla playing the support act. Glenn Maxwell-led Punjab, on the other hand, have a slender chance to make it to the play-offs as they have only five wins from 11 matches and are placed at the fifth spot with 10 points. They need to win all their remaining three matches and also hope other results go their way if they have to progress to the play-offs. Howver, it will be easier said than done, as Punjab face formidable Mumbai Indians and Rising Pune Supergiant in their last two games.

Their chances of advancing were severely dented by their six-wicket defeat at the hands of Gujarat Lions.

Despite posting 189 for three on the board, courtesy opener Hashim Amla's century, KXIP bowlers failed to restrict Gujarat, who rode on a 39-ball 74 by their top batsman Dwayne Smith.

Inconsistency has been KXIP's ban in the IPL and they again failed to rise to the occasion against Gujarat in a match which they should have won.

KXIP's South African import Hashim Amla has been their main batsmen with 400-plus runs, which includes two centuries -- against Mumbai Indians and Gujarat Lions.

Besides Amla and Maxwell, they have batsmen of calibre like Martin Guptill, Shaun Marsh, Manan Vohra, Wriddhiman Saha and Axar Patel but they will need to fire in unison.

With just over 200 runs from 11 matches, Maxwell should consider promoting himself up the order to take on the opposition attack right from the start.