'We are extremely proud of the fight we have shown. The character and fight is trademark.' 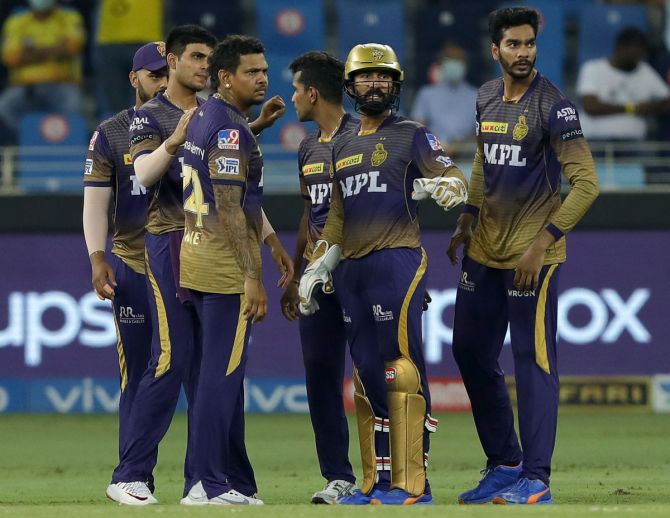 IMAGE: Kolkata Knight Riders were impressive during the second leg of the IPL in the UAE, winning five league matches out of seven as they sneaked into the play-offs. Photograph: BCCI

Kolkata Knight Riders failed in their bid to win their third Indian Premier League title in Dubai on Friday but captain Eoin Morgan said he is extremely proud of the fight put up by his team.

KKR lost the IPL final by 27 runs to Chennai Super Kings, who grabbed their fourth title in the process.

"We are extremely proud of the fight we have shown. The character and fight is trademark. Guys fought incredibly hard and performed," Morgan said after the final.

"Iyer and Gill have been outstanding. Ventakesh is new to this platform. They have been the cornerstone of our batting. Tripathi left everything out there today. Unfortunately, he picked up an injury."

KKR were impressive during the second leg of the IPL in the UAE, winning five league matches out of seven as they sneaked into the play-offs by edging out defending champions Mumbai Indians on net run rate.

"We are super proud of what all the guys did. Congratulations to Super Kings, and their leaders. Just an amazing journey, and some things we can remember for a long time," he said, reflecting on his side's performance in the tournament.

"When you fall at final hurdle, there is always a sense of what if. The way the guys stepped up and performed - particularly the young Indian guys. Big shout out to the owners, they give us immense support."

"Gaikwad is a special talent. Indian cricket is blessed with talent. He is getting better. He's got a super, bright future ahead of him. I have had a word with him, but I don't think he needs me," said the South African, who scored 86 off 59 balls in the final.

"I am really grateful for today. It was also my 100th game in the IPL. I have loved my time here. I have done almost ten years here - two seasons were a bit of a break. No. 4 in the trophy cabinet is really good."