'He is an utility player, best suited for the shorter format. He can open, can play as a finisher, extremely athletic as a fielder.' 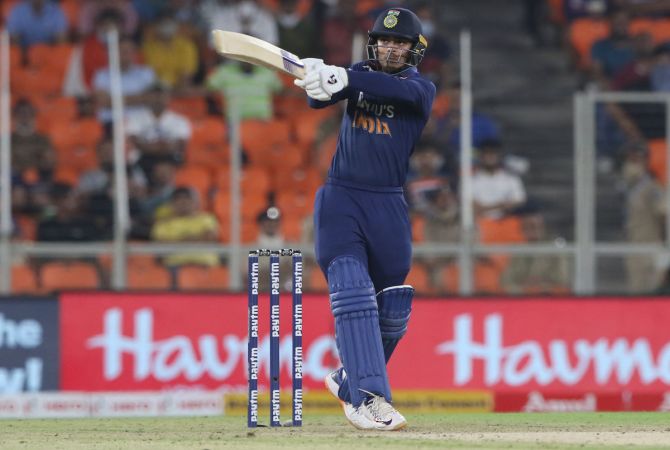 IMAGE: Legendary Sunil Gavaskar had called Ishan Kishan a 'hit-or-miss player' but according to his childhood coach Uttam Majumdar it's not the end of the road for the 23-year-old. Photograph: BCCI

Ishan Kishan may have been labelled a 'hit-or-miss' player after his failure against New Zealand in the T20 World Cup, but the young wicketkeeper-batter's former coaches feel he can become a vital cog in India's white-ball team in the next few years.

Having suffered a 10-wicket defeat to arch-rivals Pakistan in their opening match of the recent T20 World Cup, India gambled by promoting Ishan to open in place of Rohit Sharma against the Kiwisand the young left-hander got out cheaply while trying to clear the ropes.

Criticising India's decision to rejig the line-up, legendary Sunil Gavaskar had called Ishan a 'hit-or-miss player' but according to his childhood coach Uttam Majumdar it's not the end of the road for the 23-year-old.

"He is an utility player, best suited for the shorter format. He can open, can play as a finisher, extremely athletic as a fielder at the cover point region with a strong throwing arm," Majumdar said from Delhi.

A former Bihar Under-22 cricketer who had also been associated with Mahendra Singh Dhoni, Majumdar had first spotted the spark in Ishan when he was around seven years old.

"A failure can happen to any player. It was unfortunate that he got out in the big match. But if the move clicked, he would have become an overnight star," he said.

"He deserved to get a chance (in the World Cup) after the way he played in the last three innings," he said, referring to Ishan's 50 not out and 84 in his last three IPL innings and 70 not out against England in the T20 World Cup warm-up fixture.

"He is a very natural player and not afraid to go for big hits. That day, he was sent specifically to hit the ball in the Powerplay but unfortunately it was not his day. But he will get many more chances," Majumdar said.

He said with Rahul Dravid at the helm of affairs now as head coach of the Indian team, Ishan would get many more opportunities keeping in mind of the next year's T20 World Cup and the ODI World Cup the following year.

"Dravid Sir knows him inside out since Ishan became Under-19 India captain for the 2016 U-19 World Cup and also during his India 'A' days. There is a lot of hope with two back-to-back World Cups. It's just the beginning for him," Majumdar said.

While Majumdar nurtured Ishan during his formative years, Arun Vidyarthi, who is the current Jharkhand Under-19 coach, gave him the first opportunity in this state during a SAIL tournament in 2012-13.

The then captain of SAIL Sports Club, Vidyarthi came to know about Ishan from a friend while on the lookout for a wicketkeeper in his team.

"He was playing at Under-16 level so the team officials rejected him in the first season after he failed in a couple of matches. But the next season he impressed everyone and made it big and got selected to the state camp," said Vidyarthi.

"He has not looked back since then. He has shown his strong mindset from an early age and we all knew he would make it big one day."

Vidyarthi is well aware that there's no spot vacant for his ward at the moment.

"But we are just waiting for him to shine in India colours," he said.