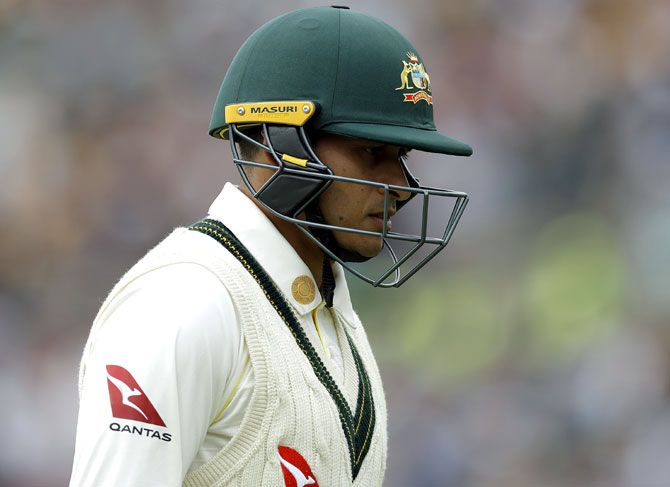 IMAGE: Usman Khawaja and Marcus Stoinis were included despite losing their national contracts after falling out of favour with selectors. Photograph: Ryan Pierse/Getty Images

Khawaja and Stoinis were included despite losing their national contracts after falling out of favour with selectors over the home summer.

Veteran paceman Andrew Tye was also a notable inclusion, having been left out of Western Australia's state contracts list.

Shaun Marsh and Nathan Coulter-Nile, who both featured in last year's World Cup squad, were omitted along with Victoria batsman Peter Handscomb.

Left-arm paceman Sams was the BBL's leading wicket-taker with 30 victims for Sydney Thunder, while Sydney Sixers' wicketkeeper batsman Philippe made 487 runs in the Twenty20 tournament, including a match-winning half-century in the final against Melbourne Stars.

Paceman Meredith took 10 wickets in six games for Hobart Hurricanes before he was ruled out of the BBL with injury.

Australia are likely to need to take a bigger squad to England given the logistical difficulties of sending injury replacements due to travel restrictions and border controls to curb the spread of COVID-19.

Australia were initially scheduled to tour England for three one-day internationals and three T20Is this month but the series was postponed due to COVID-19.

Selector Trevor Hohns said Cricket Australia were doing all they could to ensure the tour of England could go ahead.

"We continue to work with the ECB and government agencies and a decision on the tour will be made in due course," he said in a statement.

"In the meantime, the identification of a preliminary list will enable us to work with players and states more directly on the preparation for the tour in the hope it can proceed."