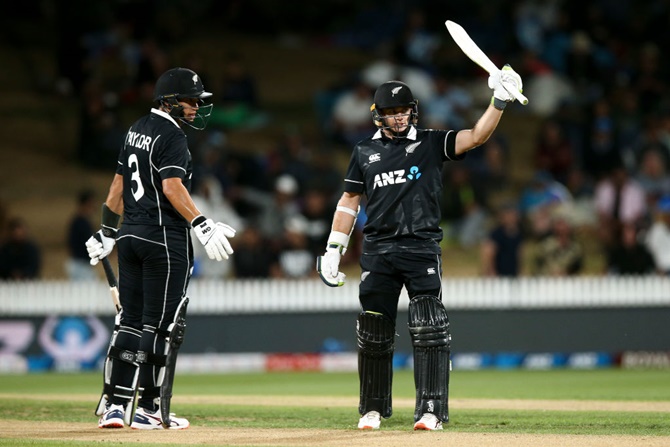 IMAGE: New Zealand's Tom Latham celebrates his half century as Ross Taylor looks on during the first ODI against India, at Seddon Park, in Hamilton, on Wednesday. Photograph: Hagen Hopkins/Getty Images

Stand-in skipper Tom Latham says building partnerships and holding nerves at crucial moments helped New Zealand get across the line in the high-scoring first ODI against India, in Hamilton, on Wednesday.

"Great performance from the guys. It was nice to keep our composure at the end and get across the line," Latham said at the post-match presentation.

"For us it was about building partnerships. The total was a little more than what we would have liked to chase. But we managed to get off to a good start and keep wickets in hand.

"We saw how hard it was to defend with the left-right combination. It's nice to make winning contributions. The way Ross played was fantastic."

India posted a huge 347 for 4 and Latham said his team will look to find their "perfect" game in the second ODI.

"We weren't quite where we wanted to be with the ball. So we got to improve and, hopefully, we will play the perfect game at Eden Park."

Taylor, who was adjudged the Man of the Match for anchoring the chase, said the right-left combination and short boundaries helped New Zealand overhaul the total.

"It has been an interesting summer, so as to speak; good to get across the line. To restrict them under 350 gave us a chance. We were fortunate with the right-left combination and we targeted the short boundary. Tom came in and released the pressure of me.

"It's been a happy hunting ground for me. Hopefully we can put up a good performance in the next game. It was nice to be there at the end after I got out thrice towards the end in the T20 series."

The second ODI is on Saturday in Auckland.