Statistical highlights of the fifth and final One-day International between India and the West Indies in Kingston, Jamaica, on Thursday. IMAGE: Dinesh Karthik plays a cut short during his crucial innings in the 5th ODI vs West Indies on Thursday. Photograph: WICB/Twitter

# Overall, India have won seven consecutive series vs West Indies in ODIs since January 2007 -- home and away.

# India's eight-wicket triumph is their biggest victory margin vs West Indies at Kingston in ODIs.

# Virat Kohli enjoys a winning percent of 75.86 as captain in ODIs -- 22 wins, seven losses and one no-result match out of 30 contested. Among the Indian captains with at least seven matches, his success percent is the highest.

# West Indies have lost four matches by eight-wicket margins at Kingston -- two to South Africa and one each to Australia and India.

# Jason Holder became the second West Indian captain to win all five tosses in an ODI series/competition. Richie Richardson had accomplished the distinction in the CAB Jubilee (Hero Cup) in 1993-94 on Indian soil.

# Shai Hope has posted two fifty-plus innings in a series for the first time -- 81 at Port of Spain on June 23 and 51 at Kingston on July 6 -- both in the just concluded series vs India.  He was the only West Indian batsman to register 50-plus scores in the series.

# For the sixth time in ODIs and the third time vs West Indies, Mohammed Shami has captured four wickets in an innings.  His figures of 4 for 48 are his best in 12 matches under Virat Kohli's captaincy.

# Virat Kohli, with his fourth hundred at Kingston, has emulated the tallies of Sachin Tendulkar and Virat Kohli -- the most in ODIs involving India and West Indies.

# Kohli remains the only batsman to have averaged sixty plus in ODIs involving India and West Indies (minimum ten innings) -- his tally being 1387 in 27 matches.

# Kohli, with 18 hundreds in 102 innings in chases has set a record, surpassing Sachin Tendulkar's feat of 17 in 232 innings.

# Just two batsmen have registered more hundreds in a winning cause than Kohli's tally of 24 -- Tendulkar (33) and Ricky Ponting (25).

# Dinesh Karthik (50 not out) has posted his eighth fifty in ODIs -- his fourth against the West Indies.

# India have won all eight matches when Karthik registered a fifty.

# Karthik and Kohli were involved in an unbroken third-wicket partnership of 122 -- the last instance when they were associated in a match-winning stand was -- 92 for the third wicket vs West Indies at Johannesburg in the ICC Champions Trophy on September 30, 2009. 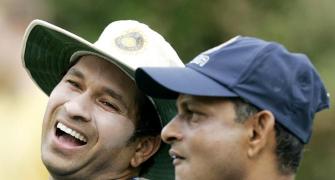 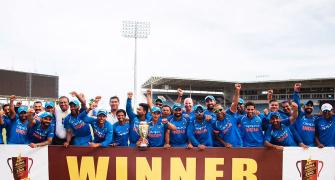 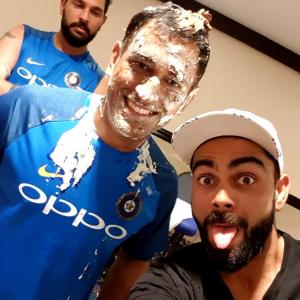