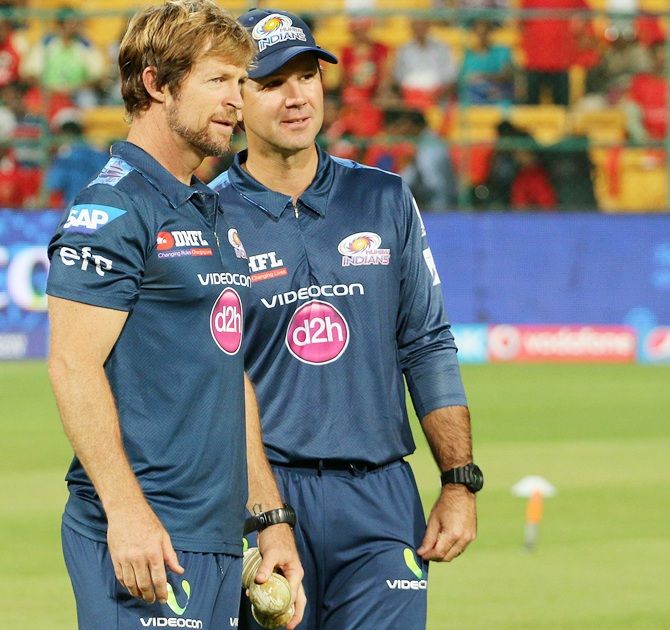 IMAGE: Rhodes is one of the exceptional fielders of his time. Photograph: BCCI

Former South African batsman Jonty Rhodes has thrown his hat for the India team's fielding coach's position, making him one of the most high profile candidate to have applied for the post.

"Yes, I have applied for the position of India's new fielding coach. My wife and I love the country, and it has already given us so much -- we have 2 children born in India," Rhodes told CricketNext website.

Rhodes is one of the exceptional fielders of his time and is best remembered for the flying run-out to dismiss former Pakistan skipper Inzamam Ul-Haq during the 1992 World Cup.

The 49-year-old South African was the fielding coach of Indian Premier League side Mumbai Indians for a long time before parting ways with the franchise.

A frequent visitor of India, Rhodes had taken a fielding workshop for a T20 Mumbai League side at the Bandra Kurla complex on the behest of former Mumbai stumper Vinayak Samant.

The Board of Control for Cricket in India has invited applications for various coaches positions, including head coach, batting coach, bowling coach and fielding coach and set July 30 as the deadline.

R Sridhar is the current fielding coach of India, whose contract was extended for 45 days till the end of the West Indies tour.

Sridhar along with head coach Ravi Shastri and rest of the support staff won't have to apply again as their their applications will be automatically considered.