Pakistan fast bowler Mohammad Amir, jailed for six months on Thursday for his involvement in cricket's spot-fixing scandal, has blamed the Pakistan Cricket Board (PCB) for not educating players enough.

"I was not given enough information about the anti-corruption code by the PCB," Amir told Geo News Channel in London shortly after having his bail application rejected. 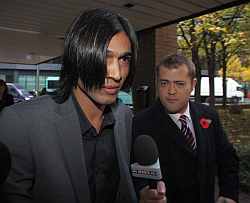 The 19-year old criticised his former captain Salman Butt and team mate Mohammad Asif, also both jailed on Thursday for their involvement in spot-fixing, for slandering him during the trial.

"They tried to rubbish my reputation and name during the trial and when the time comes I will reveal everything about this case," Amir said.

"I am really sorry for what has happened and I regret what I have done. I apologise to the Pakistani people for my actions.

"I never realised what I was getting into.

"If at that time I had known it was going to end this way I would have stayed clear. I got carried away and it was the biggest mistake of my life," he added.