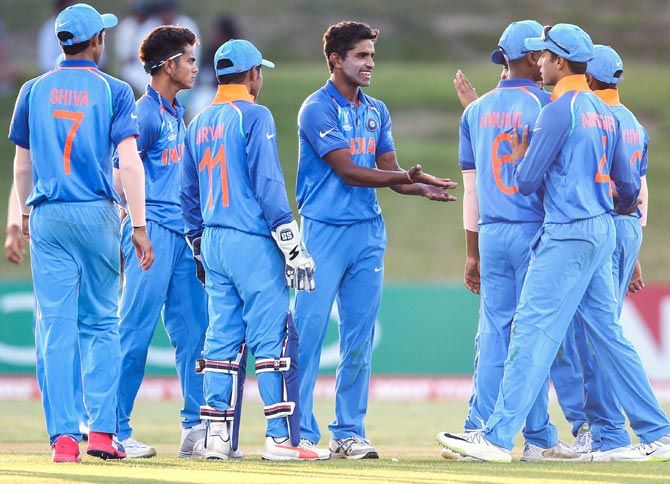 After bagging lucrative deals at the Indian Premier League Players' Auction, India's players will be eager to deliver when they face arch-rivals Pakistan in the second semi-final of the ICC Under-19 World Cup, in Christchurch, on Tuesday.

The winners will meet Australia, who romped into the final with a six-wicket victory over Afghanistan, built around Jack Edwards's half-century after some excellent bowling by Jonathan Merlo, who bagged four wickets for 20 runs, in Christchurch, on Monday.

Three-time champions India have played like a professional outfit, winning all their four matches, including the quarter-final against Bangladesh, in emphatic fashion.

For two-time winners Pakistan, it hasn't been as smooth sailing all the way. They lost their tournament opener to Afghanistan before winning three matches in a row.

However, their last two results were narrow three-wicket victories, against Sri Lanka and South Africa.

Pakistan's bowling, led by left-arm pace sensation Shaheen Afridi, has done the job for the team but the batting is far from convincing.

Ali Zaryab Asif did the bulk of the scoring in the middle-order, rescuing the side from tight situations twice. He hit 59 against Sri Lanka and followed it up with a 74 against South Africa in the quarters.

It's time that others chip in, as Indian pacers Kamlesh Nagarkoti and Shivam Mavi will look to exploit that weakness in the opposition camp.

The young Indian guns will also be high on confidence, having secured potentially life-changing deals at the IPL auction following good performances in the World Cup.

Gill, who hit a match-winning 86 in the quarter-finals and is the team's leading scorer with 239 runs, went to KKR for Rs 1.8 crore while Shaw was bought for Rs 1.2 crore by Mumbai Indians.

However, all these players will have put the post-auction euphoria behind and focus on the job at hand.

As rightly put by coach Rahul Dravid, 'auction will come every year but not the opportunity play in a World Cup'.

Now place in a World Cup final is at stake.

The highly-rated batsmen will have to be wary of Afridi, who has taken 11 wickets in four games at 10.21, including a six-wicket haul against Ireland.

Pakistan will be more familiar with the conditions, having played their quarter-final at the Hagley Oval.

India played their last game against Bangladesh in Queenstown.

After the quarter-final, the explosive Gill had said that the team is looking forward to play Pakistan.

'We remembered our loss in the Asia Cup and so were determined to win the match (against Bangladesh). As for the Pakistan game, we are looking forward to the match since we did not play them in the Asia Cup. We are sure it will be a good match,' he said.