'Fitting Venkatesh Iyer into our XI has been difficult with a lot of talented guys.' 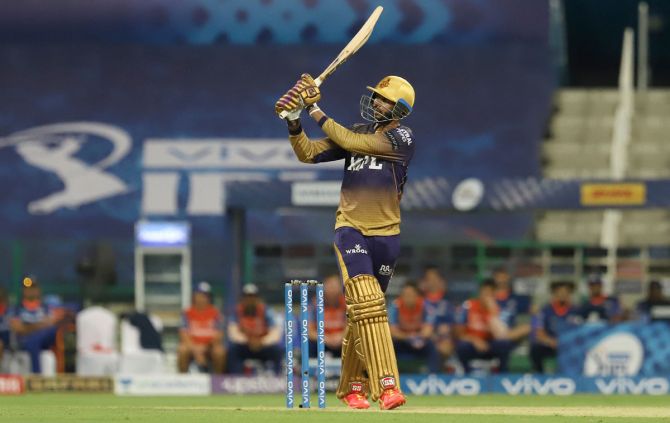 Kolkata Knight Riders skipper Eoin Morgan on Thursday said their clinical performance in the first two games since IPL's resumption sets the template for the team going forward and praised rookie opener Venkatesh Iyer for batting fearlessly in only his second game.

The commanding win over Mumbai Indians put KKR into the top-four of the points table.

"Well it's been a long time coming. Since Baz (head coach Brendon McCullum) has taken over last year, the way we have played in the last two games is the way our coach wants us to play. It suits our talent to play this way. To hold such a strong Mumbai Indians side to 155 and chase this down gives us confidence," Morgan said after KKR's comfortable seven-wicket win over Mumbai Indians in Abu Dhabi.

Young opener Iyer slammed 53 from 30 balls, which included four fours and three sixes, putting on a quickfire second wicket stand of 88 from 52 balls with Rahul Tripathi (74 from 42 balls) to put KKR on course for an easy victory.

Talking about Iyer, Morgan said: "Fitting Venkatesh Iyer into our XI has been difficult with a lot of talented guys, and it's fanastic the way he's scored his runs. In the practice games too he has gone on to play this way."

KKR spinners have played a big role in their resurgence this season, he stated.

"Sunil (Narine) and (Varun) Chakravarthy are two formidable bowlers. Sunil has been integral to KKR winning when they have done. Varun is the fresh guy. The first two games in this phase has been the template for us to play. There is only one way for us to go in the points table and that is upwards," Morgan said.

Mumbai Indians skipper Rohit Sharma said his team didn't get enough runs in the second half of their innings, as they managed only 75 between the 11th and 20th over.

"Few areas (went wrong). We started really well but didn't get enough towards the back end. I thought it was a good pitch, we failed to capitalise on the start we got and we didn't bowl well at the start.

"I don't want to look into it too much, things can happen and you have to move on. After a good start we had to get small partnerships but we kept losing wickets at regular intervals, it is not easy for new batters to go in and start hitting the ball.

"It is something that happened in the last game as well and we will address it," he said.

The second straight loss put defending champions Mumbai Indians out of the top-four in the points table.

"It is always there at the back of the mind on where you stand, we are still in the middle of the table, so we have to get back and fight and hopefully get some wins on the trot," Rohit added.