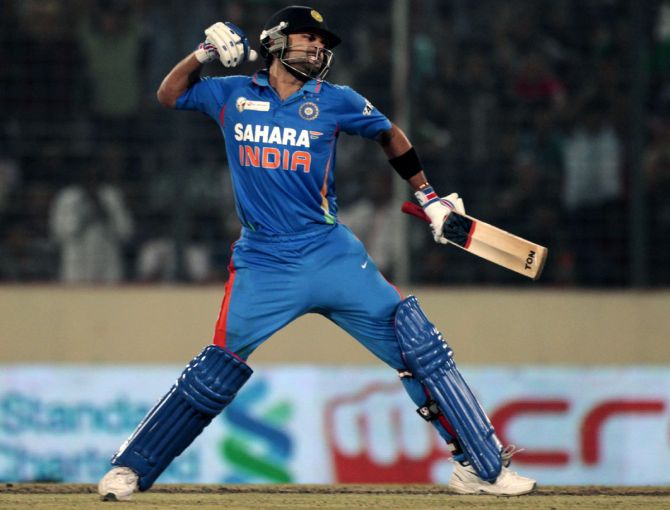 IMAGE: Virat Kohli celebrates after completing his century against Pakistan during the 2012 Asia Cup in Dhaka, on March 18, 2012. Photograph: Andrew Biraj/Reuters

Former opener Gautam Gambhir rated Virat Kohli's stroke-filled 183 against Pakistan in the 2012 Asia Cup as one of the greatest innings from the Indian captain in international cricket.

Gambhir, who was dismissed for a duck in the game, said, "Virat Kohli has played many unbelievable innings across the three formats, but this (183) is one of his greatest innings from all points of view.

Following the early wicket, Kohli in the company of Sachin Tendulkar (52 from 48 balls) rallied India with a 133-run stand for the second wicket from 115 balls.

Kohli then added 172 runs for the fourth wicket with Rohit Sharma, who made 68 from 83 balls, to put India firmly in control of the run chase.

"First of all we were chasing 330, then India was 0/1, and then scoring 183 out of the 330 runs, that too against Pakistan, and that time, he was not that experienced too," said Gambhir on Star Sports.

Kohli looked in good touch right from the start as he raced to 50 from 52 balls, before bringing up his century from 97 balls, having hit 11 fours.

The right-hander then changed gears, getting his next fifty from just 35 balls to complete his 150 from 131 balls, before he was finally dismissed for an swashbuckling 183, with India just 12 runs away from victory.

Pakistan had fielded an experienced bowling attack comprising Umar Gul, Aizaz Cheema, Saeed Ajmal, Shahid Afridi and Wahab Riaz, but there was no stopping Kohli, who smashed the bowlers all over the park.

"According to me, I think probably this is one of Virat Kohli's greatest innings, honestly," Gambhir stated. 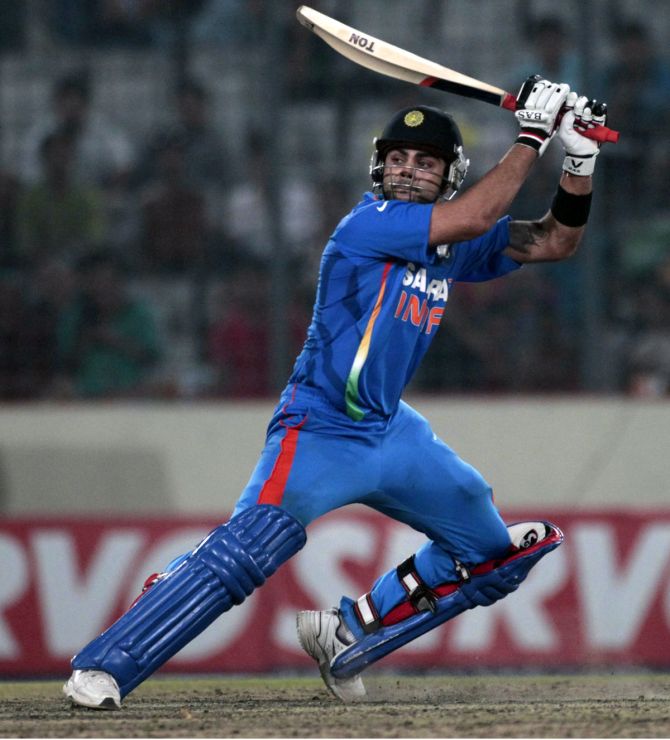 IMAGE: Virat Kohli himself has described the innings against Pakistan as a 'game-changer' in his career. Photograph: Andrew Biraj/Reuters

Kohli himself has described the innings as a 'game-changer' in his career.

"There was Afridi, Saeed Ajmal, Umar Gul, Aizaz Cheema and there was Hafeez as well. For the first 20-25 overs the conditions were clearly in their favour but I remember I was just happy batting next to paaji (Sachin Tendulkar). It turned out to be his last ODI innings and he scored a 50 and we got a 100-run partnership so that was a memorable anecdote for me," Kohli said during an Instagram chat with Ravichandran Ashwin earlier this year.

"It naturally happened because I was constantly boosting myself up to want those situations to happen. I think that turned out to be a game-changer for me," he added.

"I constantly remember that game and you spoke about Saeed Ajmal who was at his peak. I clearly remember we played a T20 World Cup in Sri lanka. In a warm-up game (against Pakistan) I started telling myself that I am going to start playing him like a leg-spinner."

"His doosra was quite difficult to face but his off spinner was not that lethal so I said I am going to hit him over covers consistently and it just paid off. As soon as I negated his doosra, his potency became lesser and even in that game (in Dhaka) I scored most of my runs against him through the offside. My only aim was to make him fear bowling the doosra against me."