'It is a good decision because, he will get time to get acclimatised to the conditions.' 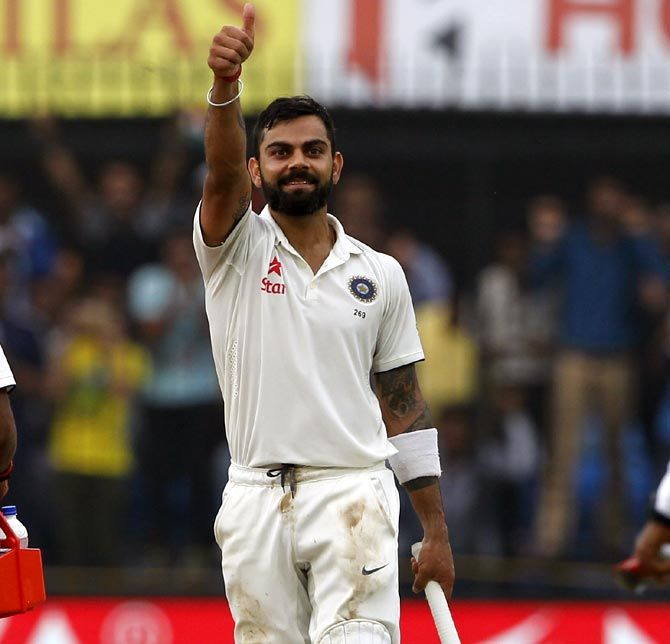 IMAGE: India captain Virat Kohli will play for English county side Surrey in his bid to prepare for the tour of England, starting in July. Photograph: BCCI

Former India skipper Dilip Vengsakar supported Virat Kohli's decision to prefer a stint in English county cricket over next month's one-off Test against Afghanistan to prepare for the challenging tour of England.

The 116-Test veteran is also highly optimistic of India's chances of taming England in their own backyard in the five-Test series -- with the battery of quality pace bowlers at the visitors' command.

Asked about Kohli opting to play county cricket, Vengsarkar said, "It is a good decision because, he will get time to get acclimatised to the conditions (in England). The last tour was not a good tour for him, so he is very keen to do well."

"In the last four years he has established himself as the number one batsman in the world, so we expect lot of things from him and England tour will be the tour for him and I am sure he will do well," the 1983 World Cup-winning team member said.

"If I was selector, I would have asked (Cheteshwar) Pujara to stay back and play county cricket (for Yorkshire), because these are the guys who will play in England. For them playing in India against Afghanistan makes no sense," said the stylish former batsman who had struck three back-to-back centuries at Lord's on three tours to England.

"Pujara will now come and play against Afghanistan. But that defies logic to me because he is playing in England, playing county cricket, and has not been consistent at the moment (so far). So he will get more chances to play in England and score runs and get into the groove (by skipping the one-off Test)," explained Vengsarkar.

However, Yorkshire have no game lined up during the Afghanistan Test, scheduled for June 14-18 in Bengaluru.

On whether India could defeat England, Vengsarkar said, "Yes I expect a lot from the tour of England simply because we have got fast bowlers and lots options in fast bowlers which was not the case before. It's a good thing for Indian cricket."

"It's a balanced team and fast bowlers have done well at the international level. We should be able to beat England in England," he said confidently.