IMAGE: Sanju Samson looks to the heavens as if to ask why, after being dismissed off the final delivery of the Rajasthan Royals-Punjab Kings game, April 12, 2021. Photograph: BCCI/IPL

The final two balls of the game provided much comment in the cricketing world after Sanju Samson denied Chris Morris a single on the penultimate ball. Rajasthan Royals then needed 5 runs from 2 balls to win. 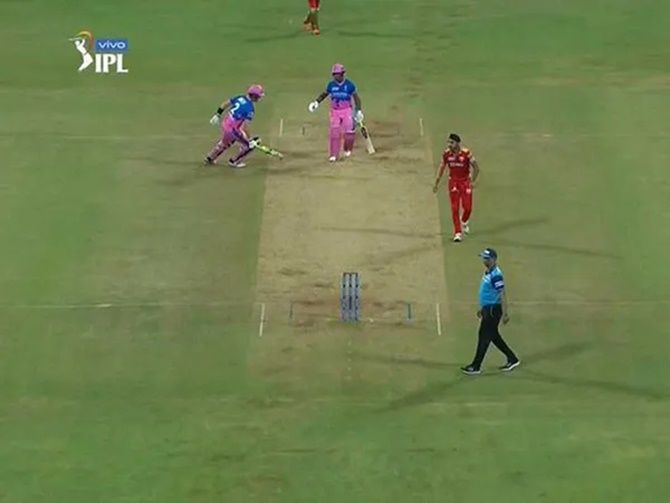 Samson slammed Arshedeep Singh's fuller length delivery to long-off, but decided to turn down the single.

Morris had almost reached the striker's end, but was sent back by his captain who likely decided he could hit a six off Arshdeep's last ball and win the game.

As it turned out, Samson was caught on the extra cover boundary and Punjab Kings won the thrilling encounter by 4 runs.

Samson hit the highest score ever by a captain on his first match as skipper in the IPL. The wicket-keeper batsman smashed 119 off 63 balls with 12 fours and 7 sixes.

Should he have taken the run and let the big South African all-rounder -- the costliest player to have been purchased at this year's auction -- hit Arshdeep out of the park?

The cricketing fraternity weighed in on Samson's decision:

Sanjay Manjrekar: Greater possibility of Samson hitting a six in that form than new batsman in Morris hitting a four. Right call by Samson to keep strike last ball I thought.

Rajasthan Royals Director of Cricket Kumar Sangakkara: I thought Sanju backed himself to get the job done. He was five or six yards short of hitting the last ball for a six and sometimes when you're in form and you believe you can do it, you've got to take that responsibility and it was really encouraging to see Sanju do that.

You can always talk about a missed single here or there, but what matters to me is his positive attitude. The next time, I believe he will hit it 10 yards further to win us the game

Snehal Pradhan, retired lady cricketer: Have no problem with Samson turning down that single. He would have backed himself to hit at least a four.

Jimmy Neesham: It's whether you think Samson is more likely to hit a 6 than Morris is to hit 4 or 6. The way Samson was hitting it I can see why he would have confidence in himself.

V V S Laxman: What a incredible 100 from @IamSanjuSamson.