Newbie Harpreet Brar produced a spell of a lifetime as Punjab Kings outclassed Royal Challengers Bangalore by 34 runs in Ahmedabad, on Friday night.

In the 11th over, Brar picked the prized scalps to put Punjab firmly on top.

Playing his first game of the season, the left-arm spinner first knocked down Kohli's leg stump and then bowled a peach to pack off Maxwell, the ball kissing the off-stump.

His double wicket-maiden had RCB in trouble at 62-3.

In his next over, he changed the complexion of the game, dismissing de Villiers, who went for the shot, but drilled it straight down to K L Rahul at cover.

With that Brar put Punjab on top as RCB were reeling at 71/4 after 13 overs and not much batting left.

The pitch got slow and low and RCB never got in control of the game.

That was not all; Brar also chipped in with a catch to dismiss Shahbaz Ahmed off Ravi Bishnoi's bowling.

Until Brar's spell, Kohli's team was alive, but the collapse he engineered resulted in a 34-run win for Punjab.

The other day it was Ravindra Jadeja who spoiled RCB's party; on Friday night, it was Harpreet Brar!

RCB slipped to third in the points table, above Mumbai Indians and Punjab Kings in that order. 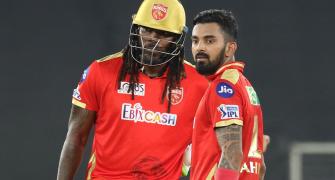 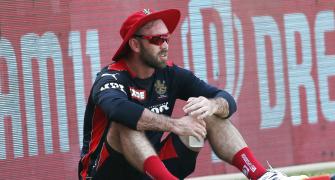 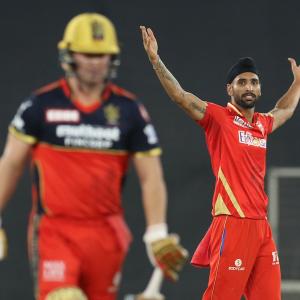