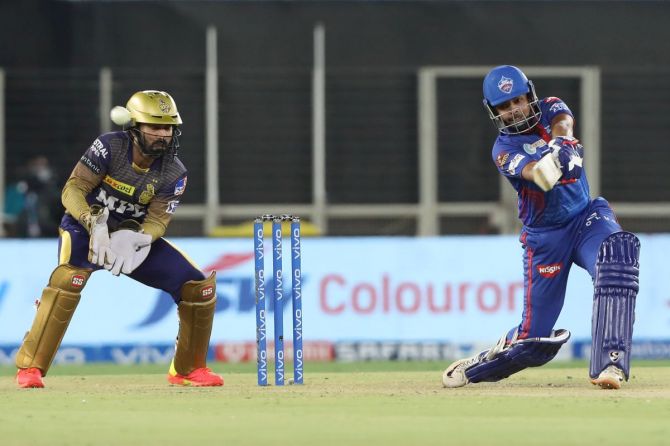 IMAGE: Delhi Capitals' Prithvi Shaw was relentless as he hammered the wayward KKR bowlers to all parts of the ground. Photograph: BCCI

Delhi Capitals surely smelt victory from a distance when they were set 175 for victory by the Kolkata Knight Riders, for on a wicket that was still good to bat on that was a total that could be breached.

And Prithvi Shaw (82 off 41) wasted no time as he walloped Shivam Mavi for six fours off the opening over to give DC a bright start.

Shaw kept the momentum going and just did not slow down. KKR bowlers bowled too many bad deliveries and he just made the most of those opportunities.

By the end of the Powerplay, he had already raced to 48 off 16 and two overs later he got to his half-century in just 18 balls, with a single to the leg side.

Shaw was relentless in his approach and he hammered the KKE bowlers, who just could not get it right. They either bowled too full or too short, making scoring runs a breeze.

His innings, peppered with 11 fours and 3 sixes, was an exhibition of big booming shots as well as well-timed, well-placed, shots.

And with fellow opener Shikhar Dhawan (46 off 47) content playing second fiddle while keeping the scorecard ticking, Shaw went about his business with confidence.

Until he was dismissed in the 16th over, there was not one false shot played by the lad.

Shaw destroyed the KKR bowling and helped Delhi Capitals make short work of the total to climb to second in the IPL points table.