IMAGE: Suryakumar Yadav walks off after sacrificing his wicket for his skipper Rohit Sharma. Photograph: BCCI/IPL

When a batsman gets run out, that is the time you see a kaleidoscope of emotions across the player's face.

Agony. Disappointment. Frustration. Even Rage at his partner running him out.

Rohit Sharma was batting like a dream during Mumbai Indian's pursuit of Delhi Capitals's score in the IPL 2020 Final in Dubai on Tuesday.

At the other end was Suryakumar Yadav, applauded by the pundits in the commentary box and elsewhere as the best No 3 batsman in the IPL this season.

And remember, Surya -- who has not played for his country yet -- outblazed the other contender at that slot -- a superstar named Virat Kohli.

Surya began his innings with a four, then a two and looked his usual sharp self, ready to chase down the DC score along with his fellow Mumbaikar.

After playing the ball straight to mid-off, Rohit erred in pushing for a single. Surya was unsure.

But with Rohit already nearing the non-striker's end, Surya strayed out of the crease to sacrifice his wicket for his captain and team's sake.

Rohit was distraught. He crouched, shaking his head, mulling over his error.

Surya walked off the ground almost nonchalantly. No doubt flickered on his face.

Unused to such selflessness in modern cricket that sadly has veered away from the gentleman's game it once was, the twitterati showered praise on Surya.

At the post-match presentation ceremony, Rohit was repentant. 'The kind of form he was in, I should have sacrificed my wicket for Surya.' 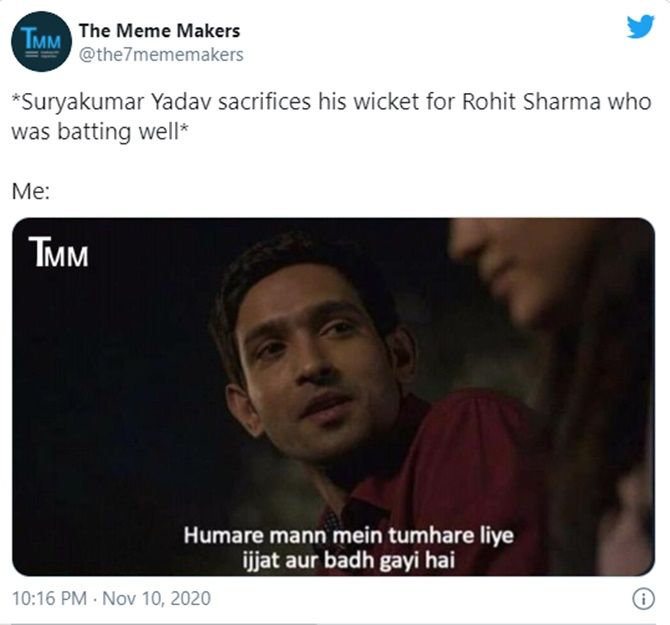 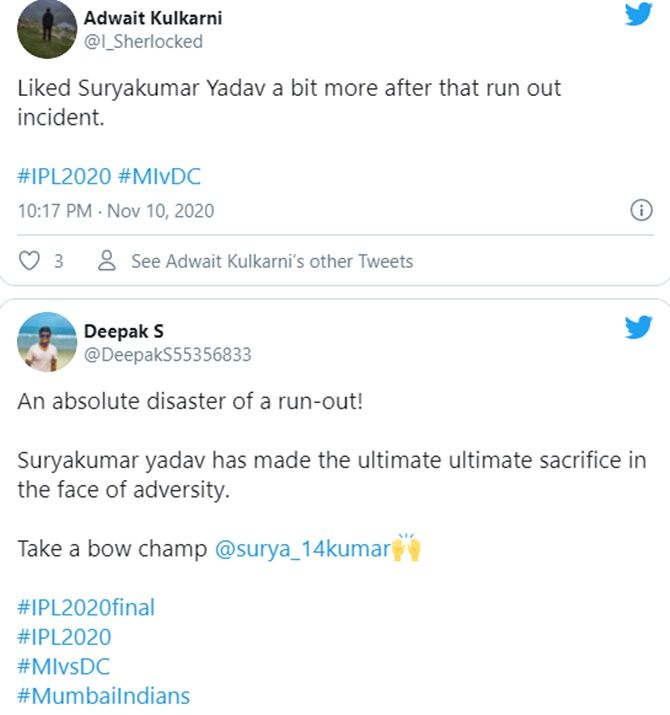