Chris Gayle aka Universe Boss channelised his disappointment for being overlooked during the first phase of IPL 2020 while Mandeep Singh played through personal grief as they conjured up another victory for Kings XI Punjab.

Mandeep lost his father three days ago, but he stayed back, and got his chance to play because of an injury to Mayank Agarwal.

Chasing 150 to victory, KXIP achieved the target in 18.5 overs, losing only two wickets. In registering their fifth successive victory they rose to fourth in the points table and are clear contenders for a spot in the playoffs.

K L Rahul and Mandeep started things off slowly. When Rahul (28) departed, the Kings were under pressure in the chase, but Gayle took the game by its scruff.

He attacked the Kolkata Knight Riders spinners who had kept it tight till then. His innings not only released the pressure, but got Mandeep going too.

During his innings of 51 off 29 balls, which included five sixes, Gayle showed why he is the 'Universe Boss'.

Gayle fell at the end, but Mandeep and Nicholas Pooran ensured there were no more casualties and took their side over the line.

It was time to stand up and applaud another Gayle storm and marvel at Mandeep's grit to play when grieving the irreplaceble loss of a parent. 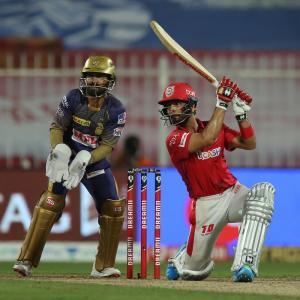 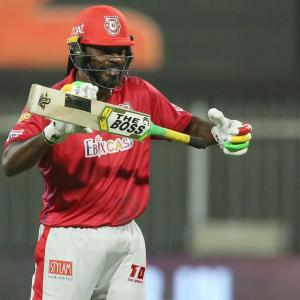