It was spin wizard Rashid Khan at his menacing best as he ripped through the Delhi Capitals batting line-up to steer Sunrisers Hyderabad to an emphatic 88 run victory and keep their hopes alive of making it to the playoffs.

Chasing a mammoth 220 for victory, Delhi were rocked early as they lost Shikhar Dhawan (0) and Marcus Stoinis (5) in the first two overs.

Ajinkya Rahane and Shimron Hetmyer rallied Delhi as they went on the counter-attack. Sandeep Sharma went for 10 runs and Jason Holder was smashed for 20 in the next over as Delhi recovered slightly to reach 54 for 2 in six overs.

The introduction of ace spinner Rashid Khan dashed Delhi's hopes of a comeback.

He struck with his very first delivery when he bowled Hetmyer. A few balls later he got Rahane plumb leg before as Delhi slipped further to 55/4 in seven overs.

Rashid, who picked up two wickets and conceded just one run in his first over, was treated with respect by Delhi's attacking duo of Rishabh Pant and Shreyas Iyer.

Such was Rashid's threat with the ball that Iyer and Pant watchfully played out his next two overs in which he conceded just five singles, despite the asking rate going past 15.

Rashid bowled his four overs on the trot. He ended his spell with another wicket when Axar Patel was caught at deep midwicket while Delhi managed just one single from that over.

When defending huge totals, the bowlers -- especially spinners -- come under attack, but in this case even singles were difficult to come off Rashid.

The Afghan spin sensation -- one of the most sought after players in global T20 leagues -- finished with wonderful figures of 3/7 in four overs, including 17 dot balls -- to register the most economical bowling figures in IPL 2020.

Delhi eventually folded for a lowly 131 in 19 overs as they suffered their third defeat in a row, while Sunrisers kept their hopes alive as they registered their fifth win in 12 games. 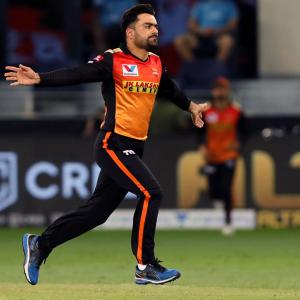