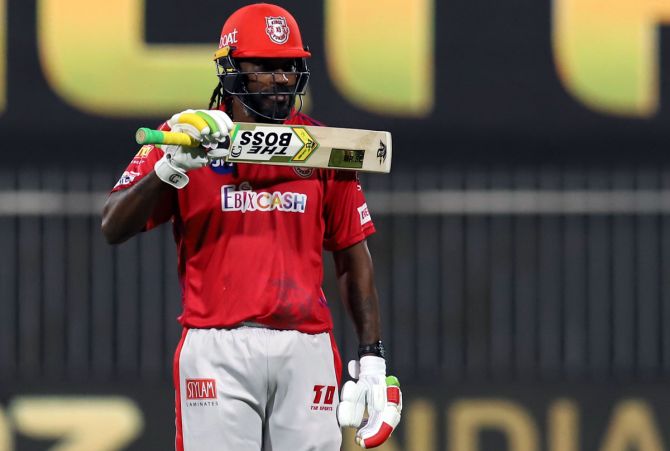 'Come on man, it is the Universe Boss batting; how can I be nervous?' exclaimed Chris Gayle at the end of a thrilling run chase against Royal Challengers Bangalore in Sharjah on Thursday, October 15.

Having suffered five defeats in a row, the calls to include the T20 legend could no longer be ignored by Kings XI Punjab.

It may have been a desperate decision to begin with, but, in the end, it turned out to be a smart gamble as Gayle started his IPL campaign in smashing fashion.

Batting at No 3, the West Indian took time, as he always does, to get his eye in before blasting a quickfire 53 from 45 balls to put Kings XI on course for victory. 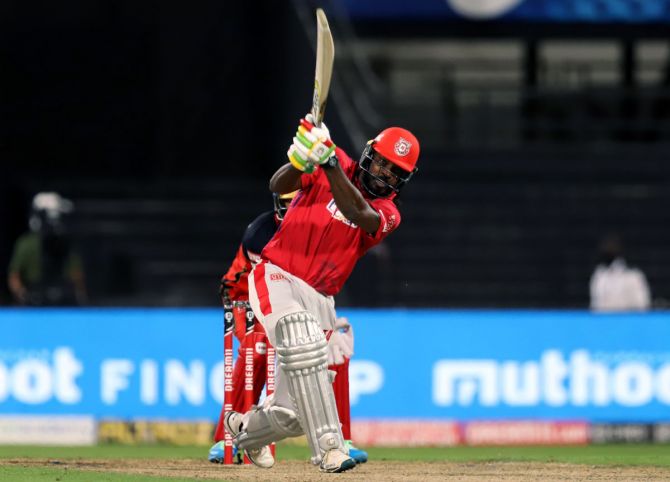 After scratching around for seven from 15 balls, he showed he had warmed up by smashing Washington Sundar for a straight six and then heaved the off-spinner's last delivery for another six over square leg, in the 13th over.

The match was delicately poised with Kings XI on 126/1 in 15 overs, and another 46 needed from five overs for victory.<

Gayle looked in a hurry to finish off the game. He lofted pacer Mohammed Siraj back over his head for a four and then crashed a wide delivery over long-off for a six.

Sundar, who had been consistent right through the IPL, suffered big time as the West Indian run-machine launched him for another couple of sixes in the 17th over which should have sealed the deal for Kings XI.

Gayle's dismantling of Sundar foiled RCB's plans as the off-spinner went for 31 runs in his final two overs which proved crucial.

Gayle and K L Rahul played it safe and took the game to the final over, where they nearly messed up another run chase.

There was panic at the end despite needing two runs to win from the final over, as Gayle was run out for 53, but Nicholas Pooran saved KXIP the blushes with a six off the final ball.

Rahul finished unbeaten on 61 from 49 balls and Mayank Agarwal stroked 45 from 25 balls, but Gayle's attacking innings made the difference.