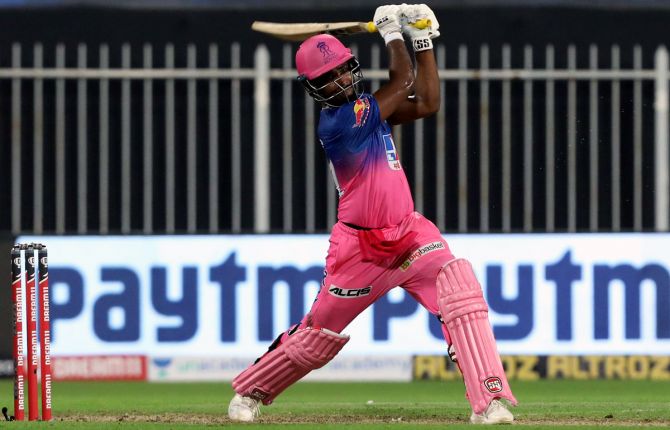 IMAGE: Rajasthan Royals's Sanju Samson on the attack during the IPL game against the Kings XI Punjab in Sharjah on Sunday, September 27, 2020. Photograph: BCCI/IPL

There is no better sight in cricket than watching Sanju Samson in full flow with the bat.

Sanju -- who turns 26 the day after IPL 2020 ends -- delighted once again with his magical batting at the Sharjah Cricket Stadium to rally Rajasthan Royals to a thrilling victory against the Kings XI Punjab in a high-scoring contest.

If his sparkling 32-ball 74 against the Chennai Super Kings in the previous game was any indication, Sanju came up with another masterclass to dispel doubts about his talent.

Rajasthan, who were chasing a record 224 for victory, lost opener Jos Buttler early, but Samson rallied them as he went on the attack from the word go.

The first ball he faced, from Sheldon Cottrell, was sent straight back over the bowler's head for a straight six. Two balls later, he carted one over mid-on for a four.

Samson showed why is so lethal against the spinners as he took full toll of young leg-spinner Ravi Bishnoi in his first over.

Stamping his authority, he sent an overpitched delivery packing over long-on for a six and made most a short ball, despatching it over midwicket.

After Steve Smith's dismissal, Rajasthan stumbled in the middle overs, with new batsman Rahul Tewatia even struggling to get singles.

Just 30 runs came in the 5 over period between the 8th over and 13th before Samson cut loose to rally his team.

Using minimum force, Samson lofted Jimmy Neesham for a six over long-off before he took apart Glenn Maxwell apart in the 16th over to bring Rajasthan back into the contest.

Maxwell was the receiving end of some brutal strokeplay as Samson carted him for three sixes in his third over.

He missed out on a deserving century as he fell caught behind to Mohammed Shami after a stunning 85 from 42 balls, inclusive of seven sixes and four fours, in the 17th over, but he had single-handedly kept Rajasthan afloat in the middle overs.

Though Rahul Tewatia stole the show at the end with his sizzling strokeplay, without Samson's blazing knock, Rajasthan wouldn't have got so far in the first place. 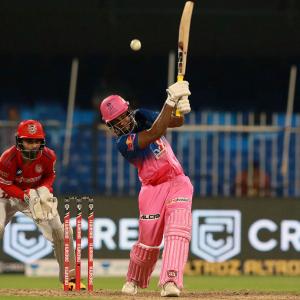