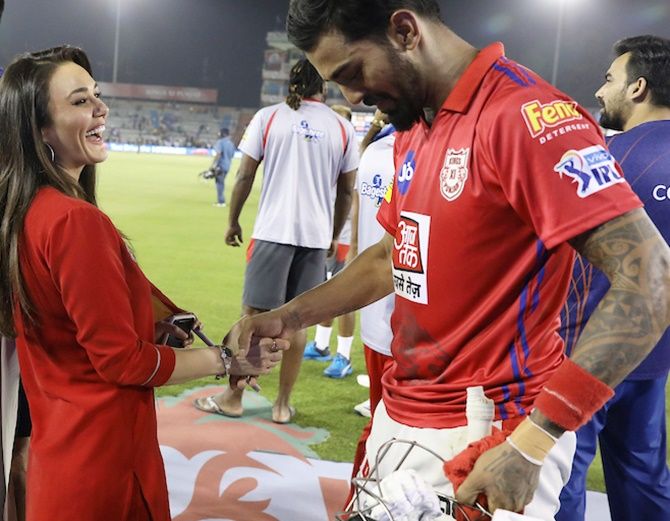 India batsman KL Rahul is 'very respectful towards women' and it was sad to see him become a subject of nationwide criticism in the wake of his and Hardik Pandya's sexist remarks on a chat chow, Kings XI Punjab co-owner and noted actor Preity Zinta said on Friday.

Both Rahul and Pandya were handed a provisional suspension for their controversial comments on 'Koffee with Karan', a show Zinta herself has appeared on. Their suspension was lifted but they still face a Board of Control for Cricket in India inquiry conducted by Ombudsman DK Jain.

"It is so good to see Rahul back in form. He is a very very nice guy. What happened is in the past. I just feel the bad the way the whole thing turned out but you live and learn," Zinta said.

"Actually, he is very sweet and respectful with women, so I don't know the way it all came out. As I said, these are teachable moments."

His friend and teammate Pandya was trolled more for his loose talk on women but Rahul too has admitted that he had started to doubt himself as a person after the incident. He has put the controversy behind and is very much in the reckoning of a World Cup spot.

As a co-owner and someone who is used to handling fame and money after spending decades in Hindi film industry, Zinta said she does share her experiences with the youngsters in the KXIP squad.

"Yes, we do have those conversations, we have been there and done that. These are young guys and they will live and learn with time. Unless you make a mistake or falter, you will never learn," she said.

The actor added that her team broke even long time ago and the ultimate goal is to win a maiden IPL title.

"We broke even a long time ago. But yes, when I got into the IPL, I wanted to win the title, especially coming from Punjab, where people have the largest heart, we want to win for them, we owe it to our fans. I am really keeping my fingers crossed this time."