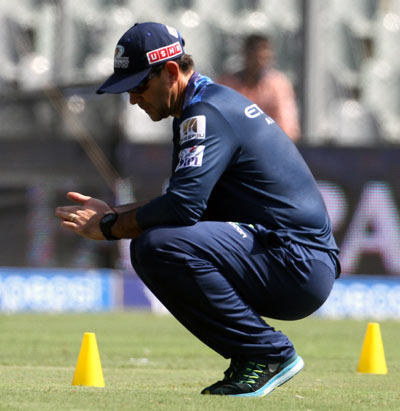 Notwithstanding his successful Indian Premier League stint with champions Mumbai Indians, former Australia captain Ricky Ponting is not tempted at Big Bash coaching roles for now and is keen to concentrate on his commentary assignments for Channel Ten in the Australian T20 league.

- 'Ponting is a fearless competitor who never wants to give up'

Ponting, who was the head coach of the star-studded MI support staff, reinforced his status as a respected tactician after leading the Rohit Sharma-led side to its second IPL title in his first stint as the coach.

But the 40-year-old, it seems, is committed to his commentary stints in the Big Bash league rather than eyeing vacant coaching positions in BBL sides, New South Wales and Sydney Sixers.

The batting legend had confirmed that coaching was a profession he might eventually consider and the MI stint has certainly got the sportsperson in him alive and kicking.

"You never say never, as far as these bigger jobs are concerned, and all of sudden ... with a few wins for the team in the IPL people are starting to talk about me being a future international coach, or whatever else," Ponting told ESPNCricinfo.

"The game is in my blood and competing is in my blood. I want to do the best I can do to keep enjoying that competitive feeling, because a couple of years out of the game with no cricket (was a difficult transition). You can't go from being such a high-level performer and competitor to nothing. You've got to have something competitive like that (IPL) in your life."

But the Tasmania-born player is now happily settled in Melbourne with his family and is keen to fulfil his commentary assignments before taking up a coaching life in future.

Dave Barham, Ten's head of sport, said Ponting is  contracted to be part of its BBL coverage until at least the 2016-17 season, having extended his initial two-year deal about a year ago.

"He's definitely staying with us for the next two years. There's no issues with that, that's great," Barham was quoted as saying in the Sydney Morning Herald.

"He is absolutely loving the Big Bash. I think he's enjoying it because he has a big say in how we do it. He's working with three of his best mates (Adam Gilchrist, Damien Fleming, Mark Waugh)...and they're just as funny off the camera as they are on it."