IPL will have two-and-half month window in next FTP: Shah

'Let me inform you that from the next ICC FTP calendar, IPL will have an official two-and-a-half month window so that all the top international cricketers can participate. We have had discussions with various boards as well as the ICC.'

'In future, you will have a scenario, where the Indian Test team will be playing a series in one country and the white-ball team will be engaged in a series in a different country. We are going in that direction where we will have two national teams ready at the same time.' 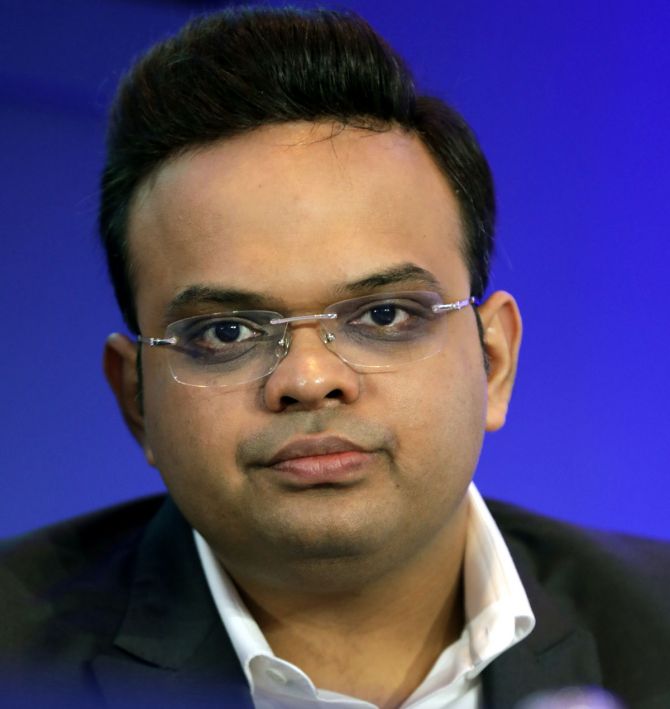 Attracting astronomical bids that eventually translated into mind-boggling revenue of Rs 48,390 crore for a five year period through IPL's media rights has not surprised BCCI secretary Jay Shah, who asserted that cricket's most talked about T20 league has potential to deliver way more.

In an exclusive interview with PTI, the 33-year-old Shah spoke on a range of subjects related to Indian cricket, IPL's place in the global cricket calendar, running the cricket establishment in times of COVID-19 and the road ahead for both Indian cricket and IPL.

Were you surprised by the intense bidding for IPL media rights or it was on expected lines?

I am really happy with the kind of numbers that we have achieved. This shows the phenomenal growth potential of Indian cricket. The auction was always going to be exciting for every stakeholder. We have been able to realise the true value and the numbers in-front of you, is a testimony to that.

These numbers show the potential of the Indian economy and the faith of investors in new India. The digital India push has changed the way cricket is watched in India. So the bid outcome of digital rights bears testimony to that.

Were there any apprehensions in the BCCI when it was decided to scale up the cumulative base price of media rights in excess of Rs 32,500 crore when the winning bid during the last media rights auction was almost half (16,347.50 crore) of it ?

You also need to check the digital numbers -- there were approximately 560 million digital viewers in 2017 and 665 million in 2021. You expect it to grow even more in the coming years.

We have agencies conducting research for us. By 2024, there will be 900 million internet users in India as we would be providers of the second-cheapest data in the world. Obviously linear viewership (TV) will remain but there is a transition towards digital viewership and that's how you realise the value.

You are talking about having 94 matches in the future. How do you plan to manage the window and various international teams having their own FTP commitments?

That is an aspect we have worked upon. Let me inform you that from the next ICC FTP calendar, IPL will have an official two-and-a-half month window so that all the top international cricketers can participate. We have had discussions with various boards as well as the ICC.

When Amazon pulled out, there were talks that they were not happy with Package C which offered only 18 games per season for non-exclusive digital rights?

BCCI's aim was simple. Our motto was maximum participation, maximum value and better price discovery. So if someone is winning A and B, they need to shell out more for buying Package C. It is as simple as that.

This is called better price discovery. I think the manner in which we pulled off the e-auction was the most transparent one.

There is speculation that IPL may be held in two phases. Where does the BCCI stand on that aspect and how do you plan to implement that?

We are having discussions with various stake-holders. There are also multiple proposals for all the IPL franchises of playing friendlies overseas. That idea is being seriously contemplated but for that we also need to speak to other boards as we would need to know the schedule of international players.

There are reports that IPL's viewership has dropped by 30 percent this time. The viewers fatigue due to too many matches is also being discussed. Also, the the recall value of games has been talked about this year. Your views?

I don't agree that there has been a viewership dip. You have to factor in pre-COVID and post-COVID numbers. The 2020 and 2021 IPL viewership numbers skyrocketed because cricket was the only source of live sporting entertainment for the Indian public. People were unable to venture out due to COVID-19. So the figures saw a sharp rise.

Now in 2022, the same public after the return of a certain amount of normalcy is venturing out. People are socialising, going out for dinners, taking vacations which they didn't do in the last two years. Also, when you calculate viewership, this year, during evening games, you would have hundreds watching it on TV while sitting in a pub or a restaurant.

Let's discuss a bit about international cricket. Will India's bilateral calendar take a hit if IPL enjoys a bigger window?

Indian cricket will remain strong as long as world cricket remains strong. Let me assure you of this. The BCCI is committed to international cricket. And it's not just about India versus Australia or India versus England marquee series, we are committed to playing even the smaller nations. All bilateral international commitments across all formats will be honoured. We are playing Ireland in two T20 Internationals this month only. We want a strong robust international circuit and want to help the smaller cricketing nations by playing against them.

BCCI also needs to factor in players workload management in a crunched calendar. How do you tackle the physical fatigue issues?

I have had discussions with NCA head V V S Laxman and we will always have 50 players in our roster. In future, you will have a scenario, where the Indian Test team will be playing a series in one country and the white-ball team will be engaged in a series in a different country. We are going in that direction where we will have two national teams ready at the same time.

Let's turn our focus on women's cricket. You have already said that the Women's IPL will start from 2023. Can you give us an idea about what the scale will be and how you plan to hold it?

This is a project which is very close to my heart. We will start with either five or six teams in the first edition. I am thrilled at the kind of response we have got from stakeholders. Multiple existing IPL teams have enquired and expressed serious interest in owning WIPL franchises.

Not to forget interest from outside. We are in discussions with other Boards about the possible window when all top cricketers will be available. I can promise that the valuation of the league, franchises and media rights will stun one and all.

You took over as BCCI secretary in 2019 and if one asks you to look back at your time so far, what is it that you value most?

Being able to conduct games despite operational difficulties during COVID-19 times was very satisfying. There were challenges and we had to stop the IPL during the second wave last year because we didn't want to compromise on health, safety and security. I would like to thank Emirates Cricket Board (ECB) for helping us with logistical arrangements in 2020 and also the second phase of 2021.

We had Indian women team playing two Test matches after eight years, which is huge achievement. We conducted more than 30,000 RT-PCR tests and had one of the safest bio-bubbles across three editions with  minimum number of cases. When Omicron cases were rising in South Africa, the BCCI sent its full-fledged team for Test and ODI series. We sent our team to Australia during the pandemic and also hosted England successfully with not a single case detected.