Unfazed by the IPL spot-fixing scandal, the event's chairman Rajiv Shukla insisted that the Twenty20 tournament will "go on", saying the only way to cleanse cricket is to "weed out corrupt elements" from the game.

Shukla said all cricketers should not suffer because of the misdeeds of some greedy individuals. "IPL will go on. To say that IPL should be shut down because of these things is wrong. It is such a big tournament and a lot many players are benefitting.

"f few players have done such wrong things that doesn't mean hundreds of good players should be blamed or suffer for that," he told reporters.

"IPL is a good concept, it's helping many players and every body is getting benefited.

"The whole thing is that we need to weed out such (corrupt) elements and for that I am of the view that strong possible action should be taken against those who are found guilty," Shukla said. 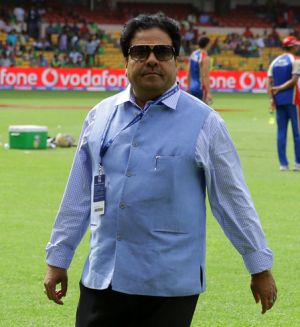 Shukla's statement came after a special cell of the Delhi police arrested India pacer S Sreesanth and his Rajasthan Royals teammates -- Ajit Chandila and Ankeet Chavan – for indulging in spot-fixing in at least three IPL matches as per arrangements with bookies who have underworld connections abroad.

Asked what would be the BCCI's stand on this issue, he said, "Whatever BCCI can do will do. The matter will also be discussed in Sunday's working committee meeting."

"ICC ACU has been engaged for IPL. They have been looking after IPL. BCCI's own ACU is also involved in this process."