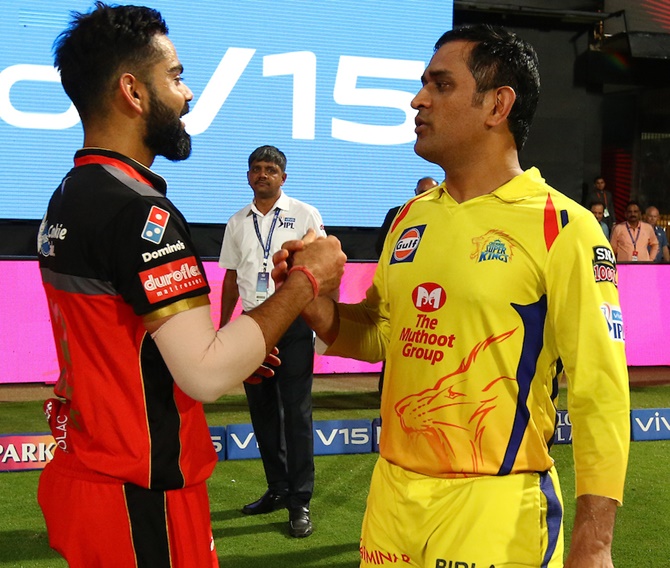 IMAGE: Dhoni nearly won the match for CSK with a magnificent 84 not out off 48 balls. Photograph: BCCI

Virat Kohli is more than aware of Mahendra Singh Dhoni's penchant to go for the impossible and was admittedly 'scared' with the former India captain's last over pyrotechnics during an IPL encounter between Royal Challengers Bangalore and Chennai Super Kings.

He smashed an unbeaten 84 off 48 balls and nearly got the required 26 runs off the last over bowled by Umesh Yadav before Parthiv Patel's 'Dhoni like calm' behind the stumps ensured RCB's victory by one run.

Understandbly skipper Kohli went through a range of emotion as he spoke about Dhoni's exploits and how impressive the bowlers were till 19th over.

"Feels good to win a game by a small margin. We've lost a couple by small margins. MS did what he does best and he gave us all a massive scare. Off the last ball, that was the last thing I would have expected to happen. There was a whole lot of emotion," Kohli said at the post-match presentation ceremony.

In fact in the 19th over, Dhoni couldn't hit young Navdeep Saini, who hit the back of length and kept the seasoned campaigner quiet.

Kohli was all praise for Saini, who is one of the five stand-bys for the ODI World Cup in England as well as the designated net bowler.

"They (bowlers) showed a lot of composure playing against a side like CSK. We were outstanding with the ball until the 19th over mark. Defending 160 on that sort of pitch and the amount of dew we had was an outstanding effort."

"Especially Saini, playing his first season (he was in the side last season but didn't play). He's shown a lot of heart. He bowls with pace and understands his limitations. He's come along well for the team. Hope he keeps fit and keeps bowling fast which is his biggest strength," the skipper had good words for the youngster.

Kohli said that the track wasn't a typical Chinnaswamy wicket, where 200 runs is there for the taking.

"In the first six overs, we thought the ball wasn't coming onto the bat that much. PP (Parthiv) and AB (De Villiers) started to rebuild. At the halfway mark, we thought 175 would've been a very good total on this pitch. We thought we were 15 short."

Qualification for the play-offs is still a distant dream considering they have to win all four and wait for favourable results.

Kohli said that the minor turnaround that has happened has been due to the fact that players have been told to do what they believe is their strength.

"We have said a lot of things in the nine games. But if you don't have confidence, none of those things matter. In the last couple of games we just said go out there and do your thing. In T20 cricket, you are going to be put under the pump. It's how well you bounce back that matters and tonight was an example of that."