'They showed they can build a platform for us to get across the line. Or set a big total.' 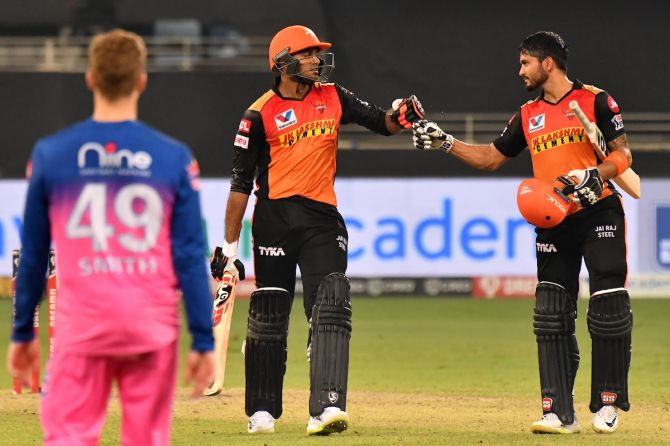 SunRisers Hyderabad skipper David Warner praised the team’s middle order, under the scanner in the ongoing IPL, after it proved itself in convincing victory over Rajasthan Royals, in Dubai on Thursday.

Manish Pandey (83) and Vijay Shankar (52) scored unbeaten half-centuries after Warner and Jonny Bairstow were dismissed early in the run-chase to help SunRisers win by eight wickets.

"It is just great to show people that we do have a middle order.

"For them to come out and play like this, I am so happy for them. They showed they can build a platform for us to get across the line. Or set a big total. I am chuffed for them," Warner said, at the post-match presentation.

Jason Holder, who was included in the playing eleven as a replacement for the injured Mitchell Marsh, impressed in his first match of the season. The West Indies Test skipper came up with figures of 3 for 33, while also affecting a run-out.

"Jason adds an extra string to our bow. His height, his experience. And he couldn't bat today, but he is an all-round package," Warner said.

The SunRisers excelled on all fronts and Warner felt a victory like this was needed going ahead.

"It was a stunning performance. Starts with the toss, where you questioned my decision to chase. We were able to bring them back after powerplay. All in all, the kind of game we were asking for."

Jofra Archer dismissed Warner yet again and the Australian said it was frustrating.

"I was frustrated that in these games, because in these games against world-class bowlers, when there is a bit of seam or swing. And it is jagging at 150k. And you are trying to get through the over. And the edge goes straight to hand."

Meanwhile, Rajasthan skipper Steve Smith rued not giving Archer another over up front after the pacer had dismissed both Warner and Bairstow.

"We started well; Jofra taking two big wickets early but we couldn't keep the foot on the pedal. Vijay played smart innings and Manish took the game on and played really nicely.

“I consulted a few other boys, it was talked about (giving Archer another over up front) but opted against it and, in hindsight, after what happened, probably would've given him one more over. It was on my mind," Smith said.

Despite the loss, Rajasthan's play-off hopes are still alive and the skipper wants to focus on winning all the upcoming games.

"It (the wicket) got better as the game went on. It was slow and stopping in the first innings; it was one of those wickets which was quite hard to start on.

“We needed some more runs in the first innings. I can't put my finger on anything; there are plenty of good players and good teams.

“We haven't been able to pull back to back wins. We just need to keep winning and don't know how things will work for us mathematically; we have to keep winning, that's our job now."