'250 would have been closer to par given the way they were going. Don't think we could've scored more than 190.' 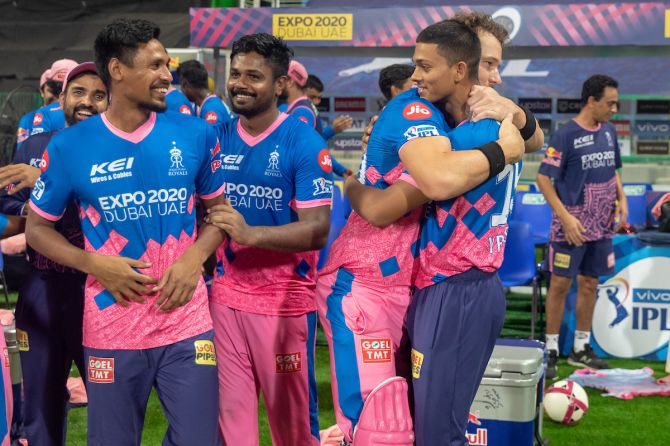 IMAGE: Yashasvi Jaiswal gets a hug from Glenn Phillips as Rajasthan Royals players celebrate after pulling off a stunning run-chase against Chennai Super Kings in the IPL match in Abu Dhabi on Saturday. Photograph: BCCI

Chennai Super Kings captain Mahendra Singh Dhoni felt the dew that set in during the second half helped Rajasthan Royals chase down the target of 190, which he believed was good enough on the Abu Dhabi track.

Rajasthan Royals chased down a stiff target in 17.3 overs, courtesy 50 off 21 balls from Yashasvi Jasiwal and 64 not out off 42 balls from Shivam Dube which overshadowed the hundred from 'Player of the Match' Ruturaj Gaikwad, in Saturday’s Indian Premier League match.

"A bad toss to lose. 190 was a good score, and the dew made it flat, and the ball started coming on well. You needed to bat well, and they did that, and put pressure on the bowlers. They just took the game away in the first six overs," Dhoni said at the post-match presentation ceremony.

Asked what could have been a par-score, the former India captain said, "250 would have been closer to par given the way they were going. Don't think we could've scored more than 190."

According to Dhoni, it's a good wake-up call and they have learnt lessons from Saturday’s defeat which should help them going into the play-offs.

"It's important to forget but also learn from this game, because there's no point learning if this happens in a play-off match. We could have used the dimensions better in terms of setting fields too."

Dhoni said once they got those runs in the Powerplay, all he could have done was to take the game deep into the 16th or 17th over.

"I think the batsmen must assess quickly what is a good score, and you tend to go hard in the T20 format and then realise that it's not a 160-180 wicket. They assessed the conditions quickly, and they didn't let pressure get to the middle order."

In the first session, the ball was stopping and coming onto the bat but that can't take away anything from a brilliant hundred that Ruturaj hit.

"It was stopping a bit when their wrist spinners were bowling and it started coming on better later, that's when Ruturaj capitalised really well. Often when you lose the game it can get brushed under the carpet but it was a brilliant innings."

He admitted that he missed Deepak Chahar's bowling in the game.

"Deepak was really good with the new ball in earlier games, and we did miss him, because today the bowlers were under the pump."

Royals skipper Sanju Samson said they are not thinking about the play-offs qualification but just about doing well in the next game. He also agreed with Dhoni that his openers Evin Lewis and Yashasvi Jaiswal finished the game in the Powerplay.

"Our openers finished off the game in the powerplay. Jaiswal was superb; hopefully he'll make it big. We have been discussing Shivam in the last 2-3 games, but Mahipal did a good job in the first few games including a 40-odd from 15 balls but we thought today could be Shivam's game."