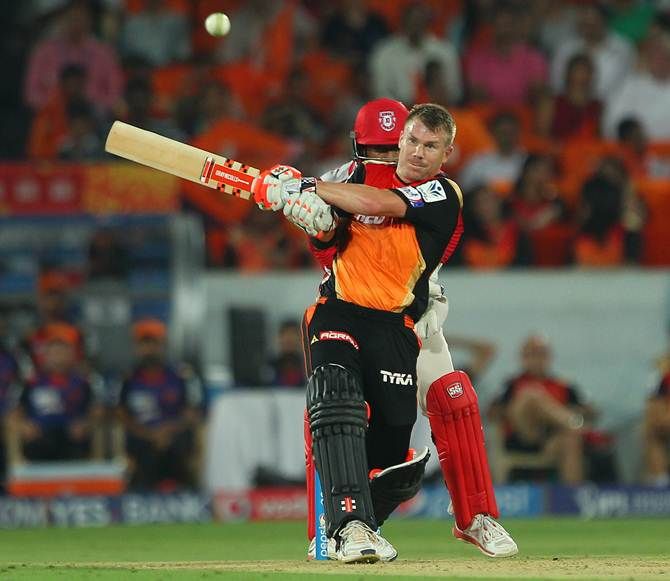 An upbeat Sunrisers Hyderabad will look to carry on their winning momentum to book a berth in the play-offs when they take on an equally-keen Royal Challengers Bangalore in a crucial IPL match at Uppal, in Hyderabad, on Friday.

The David Warner-led side is on a roll at the business end of the tournament, having won three straight games, to stay in contention for a place among the final-four.

Royal Challengers, though, are in a tight spot after losing to bottom-placed Kings XI Punjab in a rain-curtailed game on Wednesday. The Virat Kohli-led side is also in the race for a play-offs berth with 13 points from 12 matches.

- How the teams stand

Sunrisers Hyderabad, with 14 points from 12 games, found their rhythm last week against Rajasthan Royals, who are also in final-four contention, when their top-order combined well to help them post 201.

Accused of heavily relying on 'Orange Cap' holder Warner, who leads the run-getters’ chart with 504 runs in 12 games, they had Shikhar Dhawan, Moises Henriques and Eoin Morgan score significant runs in the team's seven-run victory over Rajasthan Royals. Australian all-rounder Henriques has not only contributed with the bat (a match-winning 74 not out against Delhi Daredevils) but also played his part with the ball (3-16 against Kings XI Punjab) when needed.

Having found their bearings in the nick of time, Sunrisers look set to go all the way. Royal Challengers, however, cannot be counted out of the race as the threat of Chris Gayle always looms large against any opposition when the Vijay Mallya-owned side takes the field.

Gayle apart, the team also boats of Kohli, AB de Villers and Australian pacer Mitchell Starc, who all have all made quite an impact.

De Villiers's 133 not out is still fresh in everyone's mind. The South African bludgeoned Mumbai Indians’ bowlers at the Wankhede earlier this week to help his side post 235 for 1 in 20 overs.

In the head-to-head record, Sunrisers enjoy a 3-2 advantage against Royal Challengers, the Tom Moody-coached side having got the better of the Bangalore-based outfit in their first meeting this season on April 13.