News
Business
Movies
Sports
Cricket
Get Ahead
Money Tips
Shopping
Sign in  |  Create a Rediffmail account
Rediff.com  » Cricket » 'Superman' Saha reminds his worth with bat ahead of Australia tour

'Superman' Saha reminds his worth with bat ahead of Australia tour IMAGE: Wriddhiman Saha is considered technically the best wicketkeeper in India but has not played a Test match since his last against Bangladesh in November 2019. Photograph: BCCI/IPL

Wriddhiman Saha issued a timely reminder of his worth as a batsman in Tuesday's Indian Premier League (IPL) match in Dubai as he vies with Rishabh Pant for the Test wicketkeeper's role in India's upcoming tour of Australia.

Saha, 36, is considered technically the best wicketkeeper in India but has not played a Test match since his last against Bangladesh in November 2019.

Pant, 13 years younger and known for his flamboyant batting, was preferred for the series in New Zealand earlier this year.

Playing only his second match at this year's IPL, Saha smashed 87 off 45 balls in Sunrisers Hyderabad's 88-run romp against Delhi Capitals.

"I got the opportunity for the second time this year and I took chances in the powerplay," he said after collecting the man-of-the-match award for his century stand with Hyderabad skipper David Warner.

"It's easy to play when there's Warner at the other end. In the powerplay I just play my natural cricketing shots."

Former Australia captain Ricky Ponting was impressed by Saha's belligerent stand."I know he can be a dangerous player," said the Delhi coach after his team's loss.

"But to come back in after a few games out and play like he did was a super knock and probably the difference in the game, to be honest."

Pant smashed a blistering 159 not out in a Sydney Test last year but his inconsistent batting of late has cost him his place in India's limited-overs squads where he was an automatic choice for the stumper's role.

'Superman' Saha, called so for his brilliant catching, will also take heart from India coach Ravi Shastri's endorsement of his performance.

"To the best Glove Man in the world. Outstanding performance tonight," Shastri said on Twitter.

India will begin their four-test series with a day-night match in Adelaide from Dec. 17.

© Copyright 2020 Reuters Limited. All rights reserved. Republication or redistribution of Reuters content, including by framing or similar means, is expressly prohibited without the prior written consent of Reuters. Reuters shall not be liable for any errors or delays in the content, or for any actions taken in reliance thereon.
Related News: Wriddhiman Saha, India, IPL, Ravi Shastri, David Warner
SHARE THIS STORYCOMMENT
Print this article 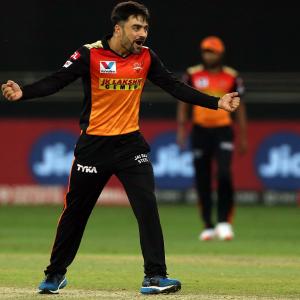