A clinical Sunrisers Hyderabad defeated Kings XI Punjab comfortably by five wickets to register their fifth win in the ongoing Pepsi India Premier League and move to the top of the points table.

By virtue of a disciplined bowling effort Sunrisers first restricted Kings XI to 123 for nine and then rode on Hanuma Vihari's 46 and Thissara Perera's quickfire 11-ball unbeaten 23-run knock to finish on 127 in 18.5 overs.

Chasing a modest 124, Sunrisers lost Quinton de Kock in the fourth ball before Vihari and Akshath Reddy (19) steadied the ship. 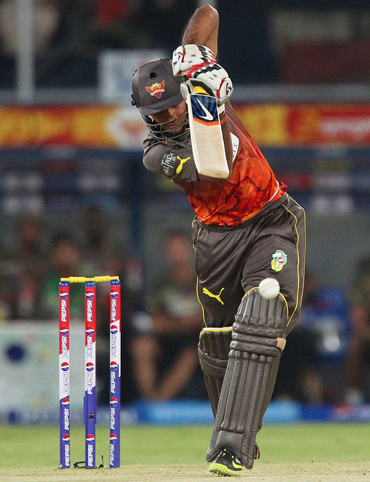 Vihari and Reddy shared 48 runs off 43 balls for the second wicket before Azhar Mahmood pulled off a one-handed stunner at mid-off off off Manpreet Gony to send back Reddy.

Vihari was playing beautifully and as long as he was there and it seemed Sunrisers would chase down the target quite easily. Vihari made a fine 46 off 39 balls with the help of five fours before leg-spinner Piyush Chawla tempted him to play a poor short and was easily caught by David Hussey.

Skipper Cameron White (16 off 23) and Biplab Samantray (10) got starts but failed to capitalise on them. While White was bowled by a low Gony delivery, Samantray fell lbw to Mahmood as the equation became tough for the Sunrisers.

Sunrisers needed 18 off the last two overs, but big-hitting Perera made it look easy and smacked Mahmood for three huge sixes to chase down the target with seven balls to spare.

Earlier, Kings XI floundered a good position to be restricted to 123 for nine.  Placed at 102 for four after 16 overs, Kings XI made a harakiri and lost their next five wickets for just 21 runs to be restricted under the 125-run mark.

Opting to bat, Kings XI did not have the best of starts as they lost their first three wickets inside the 50 runs.  Opener Mandeep Singh was the first to depart in the third over, top-edging a short Ishant Sharma delivery to wicket-keeper Quinton de Kock who took a good running catch.

Kings XI captain Adam Gilchrist then tried to forge a partnership along with Paul Valthaty. Gilchrist showed glimpses of his past when he cut and pulled Perera for three boundaries in his first over to pick up 12 runs.

But with the wicket providing considerable assistance to the spinners, Kings XI's scoring rate slowed down as Valthaty found it extremely difficult to cope up with the sharp turn leg-spinner Karan Sharma was getting from the strip. Karan struck twin blows in the ninth over in the form of Gilchrist and Valthaty, who fell in a span of three balls.

Gilchrist, who got a start today and seemed determined for a big knock, succumbed to pressure as, trying for big hit, he was caught at deep mid-wicket by Ishant.  Valthaty did not help his side's cause and a ball later he also perished, giving a simple catch to Perara at long-off as Kings XI slumped to 48 for three in nine overs.

Gilchrist's decision to send Chawla up the order to do some pinch hitting worked wonders as he made quick 23 runs off just 15 balls. Together with David Hussey, he added 40 runs off just 31 deliveries for the fourth wicket to provide some momentum to Kings XI's innings.

Chawla was going great guns until a run out cut short his stay. He hit a four and two huge sixes off Karan. Hussey, who made 22 off 24 balls with the help of one four and a six, departed a over later in search of quick runs, holed out at deep by Akshath Reddy off Ishant.

Kings XI lost their remaining five wickets quickly, courtesy some insensible cricket from their batsmen. Kings XI lost three wickets, one of which was a run out, in consecutive balls in the 17th over off leg-spinner Amit Mishra.

After being hit for two boundaries, Mishra came back strongly to pick up the wickets of Mahmood and Gurkeerat Singh (17). In between Gony also perished without facing any ball in search of non-existent double. 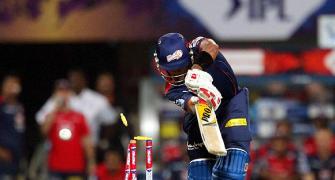 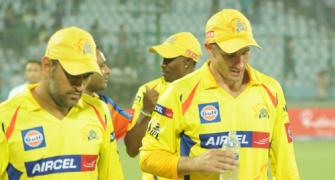 'MS Dhoni's presence makes it easier for other batsmen' 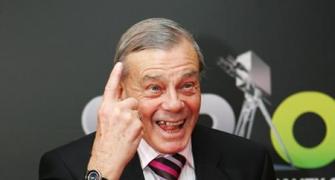 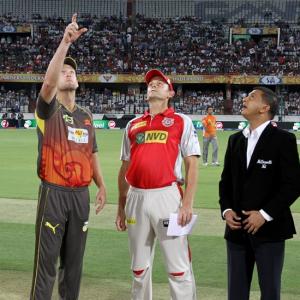 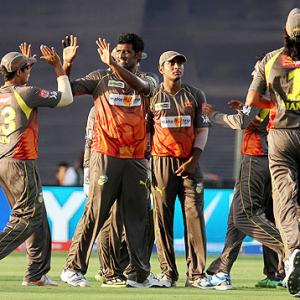