Claiming that he has been falsely implicated in Indian Premier League spot-fixing case, pacer S Sreesanth, whose police custody was on Sunday extended by two days, has sought bail in a Delhi court which will hear the plea on Tuesday.

Sreesanth's Rajasthan Royal team-mate Ankeet Chavan has also sought relief on the grounds that his marriage is scheduled on June 2 this year.

In his bail plea, Sreesanth has said that "no case is made out against me and I have been falsely implicated." 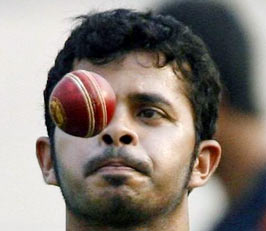 Sreesanth's advocate Vishal Gosain said that, "The penal provisions invoked against him are not made out. He has not cheated anybody."

"The particular over, about which the police is saying was fixed, was bowled by Sreesanth in a regular manner," he added.

Meanwhile, Chavan, who was remanded in judicial custody till June 4, sought bail saying that his marriage is nearing and the ceremonies are going on.

His lawyer Kishore Gayakwad told the court that "Chavan's marriage has already been fixed and it is on June 2, so he be granted bail",

Sreesanth, Chavan and their teammate Ajit Chandila, who all were playing for Rajasthan Royals, were arrested in Mumbai by Delhi police for their alleged involvement in spot-fixing in IPL matches for payments up to Rs 60 lakhs for giving away pre-determined number of runs in an over.