Rajasthan Royals player S Sreesanth, who was arrested on Thursday and sent to police custody for five days on charges of spot-fixing, reportedly told the police during interrogation that his friend and bookie Jiju Janardhan had led him into doing wrong.

"Jiju lured me into spot-fixing. He told me that if I agree for a deal with punters more money could be earned," the disgraced pacer allegedly told the police. 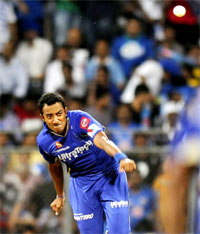 "Jiju's connections with bookies has got me into trouble," he further stated.

"I was asked to do a few things by Jiju, but I never went ahead with any offer," Sreesanth also told his interrogators.

The Delhi police, however, claim that Sreesanth, who used his friend's phone, was lured by Jiju to meet with two bookies -- Shubham and Jupiter -- at a hotel in Bombay.

They allege that they had assured him of female company, which lured him to meet them in the first place.

Mumbai's Ankeet Chavan, the other Rajasthan Royals player arrested in the latest spot-fixing episode, broke down during the probe and accepted his guilt.

"I made a mistake and I am sorry," he reportedly told police on Friday.

He also added that two other Rajasthan players were also approached by bookies.