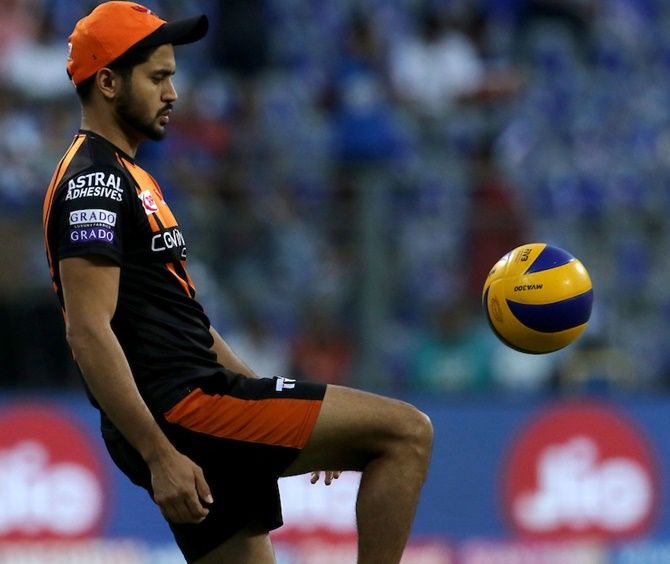 IMAGE: Batting at No 3, Pandey scored an unbeaten 71 off 47 balls against Mumbai Indians on Thursday. Photograph: BCCI

Batting at number three, Pandey scored an unbeaten 71 off 47 balls as he hit a last-ball six to help SRH tie the match with Mumbai Indians on Thursday, though the visitors lost the game in Super Over.

"I think No. 3 is a good position for him. Over the last few games, he has consistently performed. It's very good for the team as well because Bairstow and Warner have gone back home. Pandey has come and added strength," said Nabi at the post match press conference.

Nabi said in spite of their best efforts, Jasprit Bumrah and Lasith Malinga were difficult to score off with their yorker-length deliveries. Nabi and Pandey added 49 runs in SRH chase.

"The thinking was hit one or two big shots, because the wicket was easy to play. Everyone knows Bumrah is the best in death overs, he bowled brilliantly in the last overs as well as the Super Over,” said Nabi who scored 31 in 20 balls.

Rashid Khan could not stop Mumbai Indians in the Super Over but Nabi defended the decision of handing the ball to his Afghanistan compatriot, saying he was the best option for the job.

Needing 9 for victory in the Super Over, Hardik Pandya carted Khan over the straight field in the first ball for a six to virtually seal the contest and Mumbai Indian's place in the play-offs.

"Everyone knows Rashid is a brilliant bowler and he bowled brilliantly in the four overs. That's why we decided to bowl Rashid. It happens in cricket," said Nabi.

"In front of a quality player as well, it's tough. But if you assess the conditions and variations and also read the mind of the batsman, then it will be easy for the bowler," he added.

"It is disappointing because if we can't win on such pitches and lose after coming so close, then it is bad luck for our team. The whole tournament we have come close and lost matches. In the last match (against RCB) we will give 110 per cent and hope that we qualify for Play-offs," he ended on an optimistic note.