The felicitation ceremony was held at the Eden Gardens just ahead of the IPL clash between Kolkata Knight Riders and Mumbai Indians. 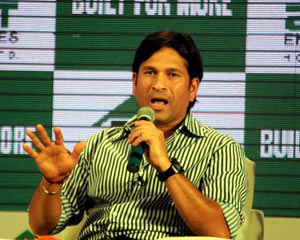 Congratulating Tendulkar on behalf of the government, Mamata said, "He is a golden boy. That's why we have gifted you a golden bat and ball. We salute your achievement. We are so proud of you."

Tendulkar greeted the jam-packed Eden crowd first in Bengali by saying Bhalo Achi and then added, "Thank you all for your support I've seen over the years. It has been a pleasure playing here. I will cherish these memories. I hope you continue to support me and the Indian team as you always have."

CAB boss Jagmohan Dalmiya also joined them as Tendulkar was bestowed with gifts, including a traditional Uttario (scarf).

Mamata had recently suggested Tendulkar's name for the highest civilian honour -- Bharat Ratna -- in his congratulatory message when the Mumbai stalwart had notched the feat in Dhaka.

The majestic Eden was decked up with giant Tendulkar banners that read 'CAB salutes Sachin'.

The CAB also had put up 65,000-odd small posters in each of the chairs in the stadium for the felicitation.

"This is for the first time, he came here after the milestone. So we plannned to felicitate him in a befitting manner jointly by the state government," CAB chief Jagmohan Dalmiya said.