'We have two more opportunities to finish in the top two. Should give us motivation to play even more fearlessly.' 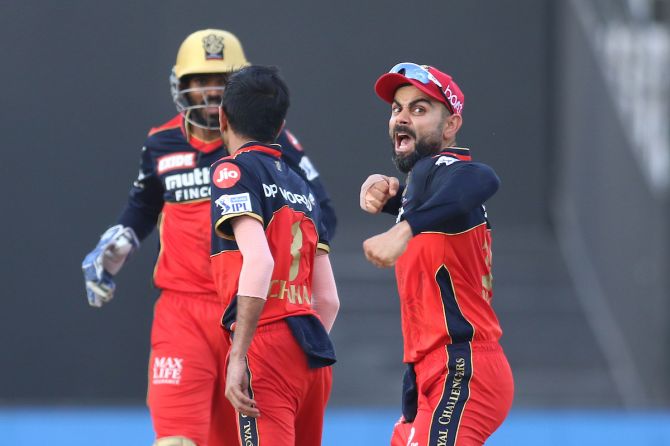 Royal Challengers Bangalore captain Virat Kohli says it is an "amazing feeling" to qualify for the IPL play-offs with a couple of games to spare, and now the aim is to finish among the top two in the eight-team league.

The Royal Challengers beat Punjab Kings by six runs in Sharjah on Sunday to make it to their second successive play-offs in the Twenty20 extravaganza.

"Feels amazing. After 2011 we haven't done it with games to spare. Eight wins out of 12 games is a great campaign. We have two more opportunities to finish in the top two. Should give us motivation to play even more fearlessly," said Kohli, after the match.

"When you don't have any wickets on the scoreboard, you can take more risks, which myself and Dev (Padikkal) have to."

He, however, said there are still areas for improvement.

"15-20 runs on this ground can be crucial. We have to plug those areas. As a side, we have had an endeavour to improve, whether in losses or wins.

"We knew the wicket would get slower and slower. K L (Rahul) and Mayank (Agarwal) batted really well, but we knew we were just two wickets from coming back into the game."

Talking about the performance of his bowlers, Kohli said, "The resurgence of (Mohammed) Siraj, ever since he has done well in Test cricket, Harshal's (Patel) inclusion, has been outstanding.

"Yuzi (Yuzvendra Chahal) has chipped in, as has Shahbaz (Nadeem). (George) Garton has come in. If the players don't step up, then the campaign goes off track."

Player of the match Glenn Maxwell, who scored 57 off 33 balls, said he has been batting well in the last two seasons of the IPL.

"Came in at a nice time to bat. Lucky to hit the first couple of risks out of the middle. To have it set up by the openers today gave us some time to get an idea of the wicket.

"Coming into RCB, they wanted me to do the exact same role (as with Australia). This (Sharjah) is probably the most difficult to adjust to. The spinners get it to skid on, which means you have to be sharper at the start of your innings."

Punjab Kings captain Rahul said he would have been happier had his side qualified for the play-offs instead of him wearing the Orange Cap.

"I wouldn't say I haven't enjoyed wearing it (the Orange Cap), but I would have been happier if we had qualified. It was a score that was par. Maybe 10-15 runs extra.

"When a guy like Maxwell comes in with that sort of form, it makes it difficult."

He said batting has let the team down and, as captain, will accept responsibility for the team's failure.

"With the bat, the last couple of years have been disappointing. Our batting has let us down. I'll be lying if I say it doesn't play on my mind that I play a role that the team demands. It's not something that I enjoy, but when you lead the team, you have to accept the responsibility," Rahul said.

"In T20, the top two or three do score bulk of the runs. You won't have people in the middle order scoring 500-600 runs. But we have missed someone in the middle who scores those 30-40 quick runs."