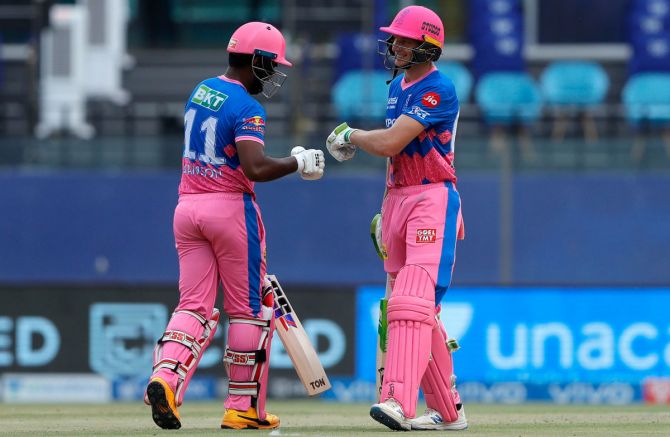 IMAGE: Sanju Samson and Jos Buttler during their match-winning partnership against SunRisers Hyderabad on Sunday, May 2, 2021. Photograph: BCCI

Rajasthan Royals got their campaign back on track, thrashing SunRisers Hyderabad by 55 runs in the IPL match in Delhi on Sunday.

Jos Buttler stroked a career-best 124 while Skipper Sanju Samson hit a quickfire 48 to propel Royals to a huge 220/3 after they were put in to bat.

Royals were dealt an early blow when young Yashasvi Jaiswal was trapped leg before by Rashid Khan for 12. However, Samson started off positively to rally the Royals, pulling Khaleel Ahmed for a six. Buttler hit the same bowler for a four over the off-side in the fourth over.

Rashid finished his spell early, by the 11th over, as SRH looked for a breakthrough. However, Samson and Buttler did well to play him out with ease.

Buttler slammed Sandeep Sharma for a six and a four in the 13th over to bring up his fifty from 39 balls. In the next over, Khaleel suffered the same fate as the duo brought up their 100-run stand in the 14th over as the Royals took control.

Mohammed Nabi suffered as Buttler hit him for a couple of sixes and as many fours to get 21 runs from the 15th over.

Shankar brought SRH some relief by dismissing Samson, caught at long-off by Abdul Samad. By then Samson and Buttler had taken the game away from SRH with their wonderful strokeplay, putting on 150 runs for the second wicket off 82 balls.